Emancipatory Queerness in the Work of Roberto Bolaño

Queer Exposures: Sexuality and Photography in Roberto Bolaño’s Fiction and Poetry (University of Pittsburgh Press, 2021), by Ryan F. Long, is an innovative and original text that addresses Bolaño’s work through the lenses of photography and queerness. Along the way, Long reveals several paradigms that shed new light not only on our understanding of Bolaño’s literary production but also on queerness. To use one of the key terms that organizes the book, Queer Exposures keeps its reader a la intemperie as the ideas, thoughts, and new meanings it proposes imply a re-signification and questioning of our own ways of understanding literature, revolution, vulnerability, and queerness. Not only this, but Queer Exposures is a book written from the vulnerability of the scholar who puts himself a la intemperie, opening to a different kind of research experience while reading and organizing the constellations of meaning and thought that are established in its analysis of the multiple texts by Bolaño (1953–2003). Queer Exposures is written from the conviction that analyzing Bolaño’s work must accept as its starting point that this work is unstable and impermanent. This is what Long calls the queerness of Bolaño’s work. In so doing, Long expands the traditional boundaries of the category of the queer, opening it to different productive uses that transcend and transgress more established ties to gender and sexuality. In this expansion of the queer, Long understands queerness as a practice as much as a place from which to position himself in order to unsettle and challenge identities. Instead, he seeks to identity fluidity and mobility in the study he performs of Bolaño’s work.

Long looks at how Bolaño’s queer characters and experiences relate to dissident sexual and gender practices, allowing us to read history in new ways. “Reading Bolaño queerly” allows for the rereading and potential transformation of history. For instance, Long studies historical periods such as the Mexican student movement, the Tlateloco massacre of 1968, and the Pinochet dictatorship, analyzing how the queerness of Bolaño’s characters was impacted by photography and the way photography “interrupts the present by exposing it to the persistence of past moments and the possibility of future readings.” This interruption is related in turn to the notion of intemperie and the uncertainty and power the revelation produced by being a la intemperie has to resist dominant and normative narratives as well as historical subjectivities.

Long looks at how Bolaño’s queer characters and experiences relate to dissident sexual and gender practices, allowing us to read history in new ways. This is related to Long’s reading of Bolaño’s work as one that resists an understanding of history from the realities of totality, teleology, and subjective coherence. In his analysis of Bolaño’s work, Long reads history and human experiences criticizing normativity and its repressive consequences. Long consider that this can be seen in crimes such as the trafficking of women. Moreover, using the category of queerness and photography to read Bolaño, Long explains how the author’s work critiques normative masculinity and its relationship with different leftist Latin American movements. Long delves into the exclusionary aspects of left-wing revolutionary politics in Latin America. During the first years of the Cuban Revolution, for instance, the Cuban government persecuted homosexuals and effeminate men because they did not comply with the features of the New Man, the model that the Cuban Revolution established as the ideal of national identity.

I should mention that in his review of the category of queerness, Long not only considers but also translates the work of queer scholars such as Eve Kosofsky Sedgwick, Jack Halberstam, and Judith Butler to the Latin American context of the work of Roberto Bolaño. He questions the untranslated deployment of queer theory in Latin America. To wit, as Long underlines, the term queer in Latin America is understood as meaning rarx or marica, and, as Diego Falconí notes, it does not have “the same strength as in English, in which it is used to designate in a derogatory way . . . homosexuals, lesbians, trans, etc.” That said, Long might heed the call of Chilean theorist Felipe Rivas, who first expressed his suspicion of North Atlantic queer theory, as he argues that although the “literal disciplinary North–South transfer ” of queerness should not be uncritically practiced or celebrated, a flat-out rejection of the promises of what he calls cuir theory should not be uncritically practiced or celebrated; strict adherence to the promises of cuir theory risks “excessive Latin American localism.”[i] If queerness, as Carl Fischer states, is generally theorized as the evasion of discursive labels that categorize sexual identities and praxis into easily surveillable categories (191), Long translates and intervenes in this same theorization of the Latin American experience and the way it has been shaped by history.

Chapter 1, “A Queer Poetics of Intemperie,” reviews Bolaño’s short story “Labyrinth,” in which the narrator tells the reader different interconnected tales about people in a photograph. In his analysis, Long explains how this tale and the gesture of its narrator addresses the limits of narrative control. This lack of control, per Long, allows for the emergence of reflections on time, temporality, and intemperie as a method of reading Bolaño’s writing and literature in general. From the notion of intemperie, Long develops his notion of the queer poetics of intemperie. By going beyond traditional ideas of queerness in Bolaño’s work (e.g., in how it critiques normative masculinity and exposes nonnormative genders and sexualities), Long exposes queerness as a method that “resists generalizing categories such as totality, coherency, chronology, biography, and the concept of the oeuvre, because it is a method that juxtaposes texts queerly.” This allows Long to analyze Bolaño’s work as temporally unsettling. Just as with the queer poetics of intemperie, Long offers several concepts that depart from the notion of the queer. Terms such as Queer Espera, Queer Esperanza, or Queer Interruption amplify the power of the queer and allow Long to look at Bolaño’s use of the queer from new and original perspectives. Not only this, but by his different uses of the queer, Long explores the scope of what the literary can do to shed new light on notions such as totalization, time, veracity, and autobiography. With this, the author understands “Labyrinth” as “not a key that unlocks a door behind which lies a secret” but “a map whose spatiotemporal coordinates are constantly shifting.”

Long joins different texts by Bolaño in a way that has never been done in the past to critique the violence perpetuated on behalf of normative gender and sexuality.

Chapter 2, “Desiring and Resisting Mastery in Bolaño’s Poetry,” addresses different poems that, according to Long, foreground a tension between incompleteness and mastery, which allows Bolaño to approach and undermine normative subjectivity and temporality. In this chapter, Long traverses the notion of “in-betweenness,” a productive category, which in this case helps him argue that Bolaño’s poetry destabilizes the idea of a coherent subject and of subjectivity. Part of Long’s argument includes explaining that this in-betweenness is created in part by the presence of androgyny, “which is often a blurring of the feminine/masculine binary,” and masculine narrators that identify themselves as feminine. With this, Long expands the traditional use of concepts such as androgyny, subjectivity, or “in-betweenness” that have been used from different perspectives by such scholars as Homi Bhabha, Santiago Silvano, and Rosi Braidotti.

Chapter 3, “Reading Queerly: Homoerotic Poetry, Temporality, and Revolution,” addresses different homoerotic/homosexual encounters and characters in several of Bolaño’s texts that navigate such topics as “sexuality, exposure, writing, and politics” in a revolutionary context. In his study, Long states that queerness implies living or existing a la intemperie. This produces a radical openness to alterity, which I understand, in Long’s context, as that which holds the potential to transform historical discourses that only foster the construction and articulation of stable and firm subjectivities, since these historical discourses are constructed from an ideology of homogeneity, inequality, and discrimination based on identity. Such was the case of the Cuban Revolution, which was articulated around discourses based on a conception of homogeneity to structure a new social, political, and cultural order excluding homosexuals, maricones, and effeminate men for not complying with the precepts of such an identitarian construction. Long also studies these realities of the Cuban revolutionary government in chapter 5, “Queer Itineraries and Moments of Exposure in The Savage Detectives,” by exploring literary texts by Bolaño that mention the persecution of Cuban queer writers such as Reinaldo Arenas.

Chapter 4, “The Detectives of Intemperie,” delves into the figure of the detective, seeing him as someone whose relation to time is queer because “he inhabits and traces itineraries of intemperie.” This figure also “makes visible erotic encounters among Bolaño’s different texts.” Long reads these encounters like photographs and suggests that these texts mutually photograph one another. The two texts Long studies in this chapter register passing, which lends itself to a constant rereading of history and literature. Here, resistance to finitude, which has nothing to do with totality, is key to grasping the importance of Long’s contribution to Latin American studies but also to those academic fields focused on such topics as subalternism, posthegemony, and infrapolitics.

Queer Exposures updates the work of Roberto Bolaño, actualizing its potential to influence how we think and write about his work but also about queerness. 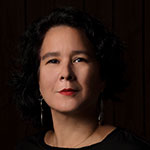 Erika Almenara is assistant professor of Spanish in the Department of World Languages, Literatures, and Cultures at the University of Arkansas. She received her PhD in Romance languages and literatures (Spanish) from the University of Michigan in 2015. Her research interests include twentieth- and twenty-first-century Latin American cultural production, especially in the cases of subaltern/marginalized subjects and communities. She has published in peer-reviewed journals such as Letras Femeninas, Revista Iberoamericana, Dissidences, and Hispanic Journal of Theory and Criticism. Dr. Almenara’s book, The Language of the In-Between: Travestis, Post-hegemony, and Writing in Contemporary Chile and Peru, is under contract with the University of Pittsburgh Press for publication in 2022. Almenara is also a published author and teaches a course called Creative Writing in Spanish, which she created in 2017.