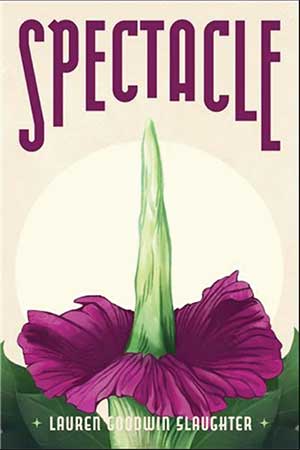 Contemporary femininity promises power to those who secure the public gaze by going viral on YouTube. But what does it mean to be visible in this particular way? How are we socialized into seeing, or being seen? Is the performance of female gender a defensive reaction, or a form of self-assertion?

Lauren Slaughter’s second poetry collection, Spectacle (Panhandler Books, 2022), circles these questions with a camera lens. Writing as a mother, a writer, a sister, and a daughter, her voice materializes in the way pieces of this collaged self touch one another. Each poem shifts the angle slightly until the spectacle becomes the spectating, an action limited to watching and agreeing to look.

Six portraits by Rineke Dijkstra, a Dutch photographer who explores the relationship between gender, youth, and cultural aesthetic norms, are included as frames or thematic divisions. In Dijkstra’s photos, the physical tension in visible bodies appears natural. Boredom and ennui characterize the poses; the faces feel deadpan, resigned, floating in a sort of artificial neutrality. This is especially true of the Beach Portraits series, which depicts adolescents in swimsuits at the beach, touching the edge of adulthood.

Using ekphrasis, Slaughter palpates the tensions between subject, object, and audience, allowing us to read all three in parallel.

Using ekphrasis, Slaughter palpates the tensions between subject, object, and audience, allowing us to read all three in parallel. Her poem “Kolobrzeg, Poland, July 26, 1992,” titled after a photo from the Beach Portrait series, sits on the recto page while Dijkstra’s photo by this title occupies the verso. In the poem, the young girl’s “resigned gaze” and shimmery swimsuit leans into pop-culture’s standards of beauty, while “one delightful detail betrays / the composition: the girl’s messy socks // of sand clinging to her ankles.”

Male violence and socialization haunt these pages. “Pulse,” for example, travels four pages in elegiac couplets, beginning with a boy trying to find words for a moth’s death and culminating in a broken lament, naming several victims of the June 2016 Orlando gay nightclub shooting that took forty-nine lives. “The Fourth Bomb Threat; Birmingham JCC” paces back and forth across the field of the page frantically, describing a mother’s response when her daughter’s Jewish daycare center receives a bomb threat. Alternating between panic and rage, the speaker blames herself: “I am the stupidest of all the stupid mothers.” And “Lockdown, 2020,” a poem about how working mothers coped with pandemic lockdowns, begins with the line: “We bought my son a videogame console / so he could hang out with his friends and kill people.”

In dialogue with Dijkstra’s self-portrait, Slaughter begins to bring her own name into the poems, addressing “Lauren Slaughter” as a constructed persona. The poet feels “the fissuring of the frame of experience” for the woman whose existence is made official, by others. Tacking between ekphrasis and embodiment, the curation of artistic selfhood borrows the aesthetics of commercialization. In “Cookery,” the mother speaks to her daughter in a parenthetical address to the image of the daughter she had been: “Such a nice, sweet girl / stuttered the yearbook scrawls.” The final line—“Daughter, say more”—enjoins the mother to speak outside the frame of how she was seen and captioned.

The rawness of Slaughter’s language, the smorgasbord of dictions, feels kinned to Dijkstra’s decision not to airbrush or digitally manipulate her negatives, allowing the photo to become “more realistic than reality itself.” Stanzas corkscrew between various selves trying to glimpse how they’ve been seen. A link between gossip and fake courtesy emerges in “Ode to the Frog in Her Throat,” where silence is “safer” than speech, even among other women. Among women policing women.

Postmodernism taught us that an image-saturated culture makes the screened self feel more real than the flesh, and these poems relentlessly return to the complexity of complicity, and the legibility of gender in childhood socialization. Kids replicate what they have seen in order to be accepted; adults aim for professional validation by meeting the visibility metrics. Solidarity is complicated by how markets valorize worth and define the ideal. By refusing solutions, these poems underscore uncertainty—the mirrors never stop moving; the blame is diffuse and self-invoking.

Slaughter’s poems relentlessly return to the complexity of complicity, and the legibility of gender in childhood socialization.

In “The Neutral Ones,” the speaker touches on this hunger for neutrality in the poet’s daughter, who gets shamed by a teacher for entering a girl’s restroom. The poet’s daughter doesn’t “look” girly enough. The line between being nonbinary and failing to perform femininity tangles and blurs in the “brutal boomeranging between mirrors,” in the apprehension of being apprehended or seen or misgendered. The poem ends by celebrating “They/them/theirs,” those nonbinary pronouns “fluid as the ocean and complex as the night / out of range of any manufactured light.”

Passing a gym today, I paused to watch a group of diverse women through a glass window. Regardless of age, race, or muscularity, the women moved while watching themselves in the mirror, pantomiming their own movements into an aerobic chiaroscuro. As I watched from the sidewalk, marveling at the window’s resemblance to a screen, I tried to imagine a similar choreographed relationship between a group of men and a mirror—and failed. Was this failure to imagine related to the fact that I had never seen men do this?

It is the act of watching that creates the spectacle and defines the attention-worthy event. There is no spectacle if we look away. But here I stand, gawking, mesmerized. 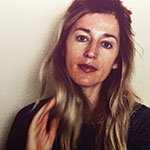 Alina Stefanescu was born in Romania and lives in Birmingham, Alabama. Recent books include a creative nonfiction chapbook, Ribald (2020), and Dor (2021), which won the Wandering Aengus Press Prize. Her debut fiction collection, Every Mask I Tried On (2018), won the Brighthorse Books Prize. She serves as poetry editor for several journals, reviewer and critic for others, and co-director of PEN America’s Birmingham Chapter.