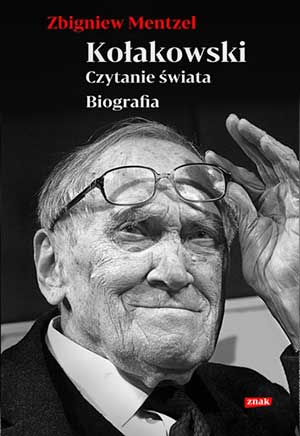 Zbigniew Mentzel’s Kołakowski: Czytanie świata (Wydawnictwo Znak, 2020) is the first full-length biography of Leszek Kołakowski, one of the leading Polish philosophers and cultural historians of the twentieth century. Its author, Zbigniew Mentzel, knows his subject very well, having edited several volumes of the philosopher’s scattered writings as well as publishing a “series of conversations” with Kołakowski in 2007–2008. In spite of this, Mentzel found his task daunting, given Kołakowski’s prodigious output in several languages (mainly Polish and English) and his voluminous correspondence (said to consist of sixteen thousand letters), now in the Polish National Library. It is therefore not surprising that this biography with its thirty-nine chapters runs to well over four hundred pages.

Leszek Kołakowski was born on October 23, 1927, in the central Polish town of Radom. The date itself, which almost forty years later marked the day of the Hungarian Revolution, is indicative of the philosopher’s character: he is a reluctant revolutionary. His father was a teacher with socialist leanings, rather different from the Polish stereotype of the “traditional Catholic.” Although his son began to study philosophy in Łódź under Tadeusz Kotarbiński, a neopositivist (i.e., “bourgeois”) philosopher, when he joined the Warsaw Institute of Training Scientific Cadres in 1950, Kołakowski was already a card-carrying Communist. He probably shared the hope of some of the younger party members, that Polish socialism would be markedly different from the Soviet model. During a visit to Moscow to take part in a course on philosophy, he was unable to learn anything new, and as Mentzel points out, he and the other visiting Poles were simply shocked by the primitivism of their Soviet counterparts.

Kołakowski probably shared the hope of some of the younger party members, that Polish socialism would be markedly different from the Soviet model.

Nevertheless, in the early 1950s Kołakowski’s critique was directed against neo-Thomism, the official philosophy of the Catholic Church in Poland. In his first books he attacked it along with its main representatives, but after Stalin’s death in March 1953 and the thaw that followed, he immersed himself in “heretical” literature, and by 1954, though a member of the Communist Party for another twelve years, he no longer regarded himself as a “Marxist-Leninist.” Thanks to the twentieth congress of the CPSU, with more information available about Stalin’s crimes against Communists and non-Communists, it was not surprising that in the autumn of 1956 Kołakowski emerged—with a series of articles in the journals Po prostu and Nowa Kultura—as the most eloquent and therefore dangerous spokesman of the so-called Revisionists. His main target now became the party, which continued to maintain that the socialist transformation was “historically necessary” and that Marxism-Leninism and “dialectical materialism” constituted science, not merely ideology.

Over the next ten years, Kołakowski published some highly original and influential essays on logic as well as critiques of religious and ideological fallacies. Among these, the one devoted to the roles of “the Priest and the Jester” was the most popular in Poland, but some of his essays on metaphysical issues also constituted a real novelty. One of these, a personal favorite of mine, is “Transcript from the Demon’s Press Conference,” which, according to the author, is set in 1963 in Warsaw, where “the Demon” (Satan) listed all the arguments for its existence, some of which were very hard to refute.

It was his biting critique of the Władysław Gomułka regime in a lecture at Warsaw University in 1966 that undermined Kołakowski’s position in an increasingly authoritarian Poland. This had dire consequences for the Polish United Workers’ Party, for many writers supported Kołakowski by giving up their party membership. At the same time, he was denounced by name by Gomułka and was more or less forced to immigrate to the West, leaving Warsaw with his family on October 30, 1968. This was actually the best possible outcome of his conflict with the Polish authorities, for, after a spell in Montreal and at Berkeley, Kołakowski was offered a senior research fellowship at All Souls College, Oxford. As Mentzel rightly notes, “in the European academic world it is hard to imagine a more prestigious appointment.” The Polish exile was initially appointed only for seven years to write the history of Marxism, but it was understood that his appointment would be more or less automatically extended. In spite of the change of regime and his growing popularity in Poland, Kołakowski remained in Oxford for another thirty-nine years, until his death there in 2009.

It was his biting critique of the Władysław Gomułka regime in a lecture at Warsaw University in 1966 that undermined Kołakowski’s position in an increasingly authoritarian Poland.

Mentzel devotes a whole chapter to Kołakowski’s relationship with Jerzy Giedroyc and his influential monthly, Kultura, published in France. He rightly points to the importance of the philosopher’s political essay “Theses on Hope and Hopelessness” (1971) but does not shy away from mentioning his differences with Giedroyc and with another friend, the Nobel Prize–winning poet and essayist Czesław Miłosz. In the late 1970s with the publication of Main Currents of Marxism in three volumes, Kołakowski’s reputation in the West grew immensely, and when his book was revised and reissued in 2005, most of his analysis of this by-then “dormant” ideology seemed still to be valid. He was one of the few who correctly foresaw the collapse of Soviet communism, though he maintained that this was not yet the end of Marxism as there remained the possibility of a new mutation, resulting in a sudden “epidemic” of this ideology.

Zbigniew Mentzel has written a book that reads well on the whole and is often entertaining, if not entirely comprehensive. It provides much information and many photographs about Kołakowski’s Polish life and relationship with fellow Poles, even if this means that his English and international relationships are somewhat neglected. This is well reflected in the “Alphabet of Friends,” an appendix to the main text, which lists the twenty-seven Poles mentioned in the book with short biographical notes, but just two foreigners, the British philosopher Isaiah Berlin and the Austrian Communist Ruth Fischer. Having spent a large part of his life in England, and some time in Canada and the United States, it is hard to imagine that this outstanding philosopher and cultural essayist had only two non-Polish friends. Should there ever be an English edition of this biography, Mentzel ought to add material about Kołakowski’s foreign reception and his foreign friends, both academic and otherwise. 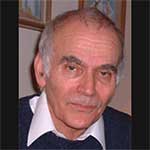 George Gömöri is a Hungarian-born retired lecturer at the University of Cambridge and has been a member of the editorial board of Books Abroad/WLT since the late 1960s. He is a prizewinning poet and translator, now living in London. His Polish publications include a book of correspondence with Jerzy Giedroyc, editor of the émigré journal Kultura (2018).