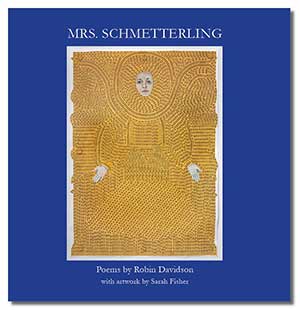 Houston’s Second Poet Laureate (2015–2017) and a member of the Texas Institute of Letters since 2019, Robin Davidson is the author of three books of poetry: Kneeling in the Dojo (2013), City That Ripens on the Tree of the World (2013), and Luminous Other (2013), for which she received the Ashland Poetry Press 2012 Richard Snyder Memorial Publication Prize. As part of her work as poet laureate for the city of Houston in 2015–2017, she produced the anthology Houston’s Favorite Poems (2018) that was modeled on Robert Pinsky’s Favorite Poem Project. She has co-translated from Polish the poems of Ewa Lipska (The New Century, 2009, and Dear Ms. Schubert, 2021). Poetry and translation are now united in her new book: Mrs. Schmetterling (Arrowsmith Press, 2021) is a transmutation of Ms. Schubert, the muse of an elusive Mr. Schmetterling, to whom Ewa Lipska devoted sixty-one poems in four volumes between 1999 and 2013. It reveals Davidson’s dedication to giving greater visibility to women and her desire to share poetry at all the stages of its creation through a community united by what Goethe called Wahlverwandschaften.

If it took Lipska sixteen years to develop the character of Ms. Schubert, it took almost that long for Davidson to birth Mrs. Schmetterling. She added to Lipska’s multilayered cultural resonances and prolonged the cast of characters surrounding her. Most importantly, her “second generation” character developed a contemporary outlook about the commonality of women’s dilemmas between family and career, sacrifice and self-fulfillment across time and cultures. The genealogy of Davidson’s book reveals this. After her relationship with Lipska through her translation of Droga pani Schubert [Dear Ms. Schubert] and Miłość, droga pani Schubert [Love, dear Ms. Schubert] developed into a friendship, she sent Lipska her first seven “Mrs. Schmetterling” poems in 2013.

Later, she wrote one poem for the poet Martha Serpas, and her long walks in Paris with Carolyn Forché inspired her cemetery poem. The poem “Stain” was written as an ekphrastic commentary on Sarah Fisher’s juried Stain – Self-Portrait, which Davidson first saw in 2018. Her serendipitous and immediate bonding with what she calls the “she angel-nun-butterfly” image led to the ekphrastic poem. The close collaboration between Davidson and Fisher in 2020 culminated with the participation of Ezra Fox, Arrowsmith’s senior editor and graphic designer, who helped choose Fischer’s twelve illustrations for the book and pair them with the poems. Davidson also drew inspiration from Zbigniew Herbert, Edward Hirsch, and Adam Zagajewski. Finally, by naming her husband, her daughter, and her daughter-in-law as part of her support system, Davidson reveals that she managed an impressive network to assist in the creation of Mrs. Schmetterling, thus confirming the importance of the proverbial village for creative endeavors.

Fisher, like Davidson, is a Houston-based artist who paints, draws, and works with mixed media. Her Stain – Self Portrait uses yellow dry-cleaners’ stickers labeled “Stain,” “Repair,” “Test,” “Fold,” and “Tested,” to design seams, folds, and hems and to cover the female body in a way that reminds viewers of Gustav Klimt’s Lady in Gold, Byzantine or Russian Madonnas and child icons, Queen Elizabeth I, or Peruvian or even punk rock/DIY works. With only her face showing, the woman becomes a butterfly in all the seasons and moods of life, with hands, arms and feet emerging periodically. When not covered by stickers, the woman’s body parts “melt” into the white page as if to grant her wish to become invisible, with only her dress showing, a very pregnant black dress for the poem “Children,” or a blue dress for the poem “Invisible.” There is a palpable affinity between art and words, with Fisher explaining it as the “quite magical way my work dances with Robin’s poetry.”

Lipska’s Ms. Schubert was a maiden domestic character; she loved and cared for her devoted admirer, Mr. Schmetterling, whose infallible devotion educated her in the fine points of high European culture during an elusive romance steeped in Viennese cafés, lovers’ secret codes, Ferris wheel rides, promenades on riverbanks, erudite readings, handsewn coats, and tender meetings in hotel rooms somewhere in central Europe. Mrs. Schmetterling is assertive and exotic. She is a woman with multiple ethnic and national identities and cultural allegiances. Born in the Italian city of the “Duomo,” which could be any major Italian city with a large Roman Catholic church building, she lives in Kraków, a city foreign to her, takes daily walks in the parks that surround the old city, cooks and sews, and awaits the mail. She has lived in Ukraine, in Lviv, where over one hundred thousand Polish Jews took refuge in World War II, and the gardens where her children once played sound like American backyards. She cultivates a flower from the Southern seas, the amaryllis, and she revives amidst the local chestnut trees. She weaves nature within herself and always returns to it as her anchor, describing her heart as “a flight of cranes.”

Mrs. Schmetterling weaves nature within herself and always returns to it as her anchor, describing her heart as “a flight of cranes.”

Taking situations from Ewa Lipska’s book, Davidson created a modern-day character that nonetheless preserves its timeless character. Mrs. Schmetterling is an ordinary housewife raising her family by herself while nagged by vague aspirations and feelings of inadequacy, and yet, a female Mr. Cogito, she reflects on her life from her first sexual awakening to her old age. She is well educated and can imagine an argument between Goethe and Wittgenstein or debate with herself the theory of colors and cloaking theory. Her inspiration and alter ego are not her lover/husband, who is only mentioned twice, but her mother who was a painter. Her contemplative nature tears her between kitchen and culture, children and art. She lives literally and figuratively between both worlds, on the corner of Barley Street and Mickiewicz Avenue, undecided between the creative and the trivial. She transgresses gender conventions and surprises us just as visitors to the Marie Curie household one century ago were surprised to see the great scientist cook radium with one hand and soup with the other.

By naming her “Judith,” Davidson underscores her Jewish identity, strength, pride, determination, and radiant beauty. And yet there is sorrow in it. Judith once visited the Montparnasse Cemetery in Paris to find the traces of words in this “world of incarnate memory” and “stronghold against erasure.” Calling history “a planetary dry-cleaners,” she attempts to bury the pain of remembering the echo of the last Jewish prewar song in a park or the sound of Nazi boots on the asphalt of the streets of Vienna. Her last name translates as “butterfly,” which represents enduring beauty in spite of fragility; it developed during both world wars in resistance to atrocities and became a symbol of rebirth and hope. From Holocaust victim Petr Ginz’s 1942 poem “I never saw another butterfly” to the sowing of butterfly gardens today, the butterfly is also a sign of life and freedom. Yet memory never stops making Judith wish to be invisible and “elsewhere.”

Schmetterling translates as “butterfly,” which represents enduring beauty in spite of fragility; it developed during both world wars in resistance to atrocities and became a symbol of rebirth and hope.

Lipska’s fascinating, enigmatic character has taken flight under Davidson’s pen. From a complex seed, Ms. Schubert has grown into a blooming tree, a witness of our times that floats across the globe and over historical divides like Virginia Woolfe’s Orlando. She is a-corporeal and intangible, and yet she is real and grounded. Having made closure with the past in the way one puts Christmas decorations away, having become one with her deceased mother, she is on a quest to affirming her new identity in the last six poems of Mrs. Schmetterling. Her metamorphosis from music (Ms. Schubert) to visual arts (Mrs. Butterfly) is completed by her new determination to survive the Covid pandemic. She has waited a long time for this visionary purpose. Untethered, she wants to paint colors and be free to live anywhere her imagination will take her. In the poem “Color Theory” we read:

. . . She’d rather consider Kandinsky, his belief in the spiritual

vibration of colors, the moods and emotions they create –
warmth or cold, harmony or chaos, relief or angst.

She learned as a child to think of color in binaries,
their shades a more precise cataloging of relationships opposed

on the color wheel. She knows now that binaries oversimplify,
but who should have power to complicate a shade, to name a paint

for blood and blame, or purity.

Is Mrs. Schmetterling truly and fully untethered and unambivalent? Having reached grandmotherhood, she wants to go home and mend pajamas. And her inadequacy may not have disappeared, as we read in the ending of the same poem:

. . . She grieves.
She holds her paintbrush to the light, and sees

an ugliness that will never stay covered, no matter
how many gallons of paint the world may offer.

Like Ms. Schubert, her character remains open-ended, and like her she could state: “I am a date; in me there is no place or time.” A quiet revolutionary, she gives Davidson’s poetry the rhythm of breathing and invites her poetic saga to be continued.