“So much darkness”: Looking for the Light in Bitan Chakraborty’s The Mark

Simplicity and quiet elegance never fail to impress us. The effect of a good short story often is like a fugue or an adagio in a musical composition, creating impressions fugitifs, in the best manner of the impressionists, sketching in a mood or elaborating on a motif or theme. Bitan Chakraborty’s The Mark (Shambhabi Imprint, 2020) is unquestionably a collection of short stories revolving around the everyday lives of ordinary characters that leaves an impression of serious engagement with the contemporary Indian milieu and is also aesthetically pleasing. Chakraborty is already an established author of the novel; his foray into the short story adds a further dimension to his existing repertoire. A writer must “convincingly create an illusory world if he is to captivate his readers,” Chakraborty has said, and he appears to have lived up to his aesthetic or writerly principles in The Mark. Peripheral and marginal lives lived by characters grappling with the challenging socioeconomic realities of our times, mediated with narratorial control and poise—these are what make the stories in The Mark a testament to the craft of a storyteller and short fiction writer par excellence.

The stories in the collection revolve around everyday life and broad human themes—the despair and dislocation of urban displacement, the frustration of being differently abled, a warm father-son relationship, a moment of epiphany on a crowded bus in the city, a young girl’s coming to terms with human betrayals, the exploration of a young boy’s guilt-ridden consciousness, a young woman’s hard fight against the establishment to hold on to her convictions—all these are explored through an apposite style and technique. Every detail is credible, anchored in the mundane reality of city-dwellers in urban metropolises in contemporary India. Chakraborty is not a fantasist or fabulist; reality is an unvarying constant in his stories. Pritha and Kamal, Chhanda and Bikash, all have to confront the harshness of reality—and the harshness is of an even monochrome, a hard and unvarying glare—virtually unrelieved by tenderness, as in a Mrinal Sen film. One has perforce to live with the situation; women do not want you if you are “handicapped” in any way, not even prostitutes; the nexus of politicians and realtors will evict the poor and the helpless in a ruthless quest for money-making; in a prevailing scenario of joblessness one has to survive by giving private tutoring. Reality is inescapable, unvarying, almost unending. Even if one wishes to escape from it in some fantastic utopia, like Arpan, with the gentle radiance of his artificial lamps in his garden, one cannot do so. Reality inevitably impinges on us. Where is la dolce vita? The question is purely rhetorical.

The harshness is of an even monochrome, a hard and unvarying glare—virtually unrelieved by tenderness, as in a Mrinal Sen film.

Any yet, though Chakraborty is a pragmatist and urban realist—the idyllic beauty of rural Bengal that irradiates the short stories of Bibhutibhushan Bandyopadhay, for instance, which offsets the grim reality of poverty and hopelessness, is not there in any way—we do not feel the bitterness of disillusion. There is a humanist edge in Chakraborty that redeems the apparent hopelessness. If the treatment of urban poverty and despair reminds one of Émile Zola, there is ultimately, however, a note of affirmation that lends a positive upsurge of energy and makes The Mark humanist rather than nihilist in tone. Kolkata and its suburbs are graphically sketched in the stories. The overcrowded local trains, the dark blind lanes where prostitutes stand at nightfall, crowded Bagbazar thronged by buyers of the Chaitra sales, small tea stalls, traffic congestion: all emerge to re-create a throbbing, living, and many-hued city, a megalopolis filled with varied humanity with dreams, hopes, and desires—some to be fulfilled, some to remain forever unfulfilled. It is a city of dreams and yet a city of despair where hope lives, in however insignificant or infinitesimal a manner. It is unquestionably to Chakraborty’s credit that he is able to conflate such paradoxical possibilities within the frame of a single text.

There is a humanist edge in Chakraborty that redeems the apparent hopelessness.

The characters too are lifelike and imaginatively re-create a fictional world that stands on its own. Chhanda and Pritha are the most detailed portrayals. Chhanda, whom her professor uncle Nakaka calls Tun, by a witty remodeling of her nickname Tutun (“I’ve removed one of the twins” as “n” becomes alone), learns so much more of life in “The Mark,” the eponymous story of the collection. Who controls the proprietorship of a work of art, the artisan or the patron? Chhanda is confronted with this shifting paradigm of creative artistry by the strangely appearing and disappearing footprints in Nakaka’s room. Together with this is the betrayal of her gifted student Pratik, who stands fifth in the state in the Higher Secondary exam and becomes an overnight celebrity but fails to acknowledge her teaching. Chhanda learns life-changing lessons through her experience: even the young can be time-severs; once their goals are met they disappear without any gratitude.

Pritha, in “Broken Moon,” is brought up even more sharply against reality. This time it is the ugly reality of landsharks and realtors. Bubu and her daughter are the rootless urban dispossessed whose hut stands in the way of a politician’s dream of building a statue of Subhas Chandra Bose. If she stands on their side, Pritha finds she stands alone. She is cautioned not to “involve” herself or she will “find troubles,” verbally abused, assaulted, dupatta torn—she faces all the ugly terror tactics of the mafia dons. And even Kamal, who had tender feelings for her, watches indifferently. As Pritha goes ahead with her lonely crusade for justice, with Facebook posts and media highlights, she realizes that inner strength alone sustains. Her single act of violence that ends the story, her shattering of her father’s cherished lamps in the garden, is a symbolic gesture betokening her recognition of the brutal reality of our circumambient lives. “How long will you help the darkness with this artificial light?” she asks her father pointedly. Her harrowing experience enables her to negotiate invisible visibilities and visible invisibilities, unlike Arpan who has cocooned himself in a world of illusions. It is a courageous gesture signifying a resolute breaking free of shackling self-delusions, and it is to Chakraborty’s credit that he is able to sketch such an awakening in a long short story.

The stories in The Mark are replete with interesting epiphanies, in the best Joycean manner. Bittu in “Three Coins,” Bikash in “Incompleteness,” and the eponymous narrator in “You and I” all experience such epiphanies. As the narrator says in “You and I,” chronicling this moment: “My eyes moisten. All my frustrations vanish immediately.” A finely balanced ending to a story that reads more like a prose poem in its evocative, stream-of-consciousness-like narration, its deft presenting of short vignettes of a sweltering summer afternoon in Kolkata. Chakraborty gives us more of these finely poised endings; some of them bring the stories to an orchestrated close, others end by offering a counterpoised anticlimax, in the characteristic Maupassant manner. The time shifts in “The Mark,” time past coalescing into time present, and telescoping of the past and the present are other variations on narration that attest to Chakraborty’s dexterity in craftsmanship.

A brief note now about the translation: Utpal Chakraborty has done a fairly creditable job. The tales are a seamless whole of the myriad-colored tapestry of contemporary urban lives. The prose is idiomatic, crisp, and enlightening. Utpal retains the quintessentially Bengali flavor of the text by retaining words like thakurpo, dadu, Nakaka, and others, and transliteration of idioms like “money . . . does not fall from trees.” Again, certain words denoting objects like “hatch,” “plank,” and “spatula” are possibly translated for giving a convenient leeway to Bengali cultural space. The translator has the difficult task of negotiating the language of the genteel upper-middle-class Bengali world of Nakaka and Arpanbabu (even this italicization is a cultural marker) but also the seamy underworld of Kelo and Nantu. To the uninitiated, traversing these worlds will not be a problem due to the translator’s laudable efforts.

“You who could have enlightened a thousand young minds . . . you [who] had the scope and capability . . . failed,” says Pritha in a prophetic statement at the end of “Broken Moon.” It is to Bitan Chakraborty’s credit, however, that he has succeeded in conveying to his readers moments of vision and affirmation in the dark times we live in. 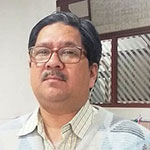 Indrajit Bose is currently assistant professor of English at Guru Nanak Institute of Technology, Sodepur. He graduated from St Xavier’s College, Kolkata, and did his MA and PhD in English at Jadavpur University. He holds the eTBE certificate from the University of South Carolina and has been trained in ELT by the British Council, India. Bose is a Fellow at Presidency College, Kolkata. He also teaches French at GNIHM, Sodepur. He is a teacher trainer, materials developer in ELT, poet, translator, and the chief editor of Poetry Central.