This whirlwind adventure begins with protagonist Qamar’s birth and follows her life along the titular wondrous journeys around the Mediterranean. Less novel than novella, Sonia Nimr’s Wondrous Journeys in Strange Lands (Interlink Books, 2020), first published in Arabic in 2013, sees its heroine become a slave, a pirate, a bookseller, and more, but like Qamar, it never stays in one place for long. In fact, the book reads more like a compilation of short stories because, as readers, we never really get to settle into one story and its characters before we are whisked off to the next one.

While Wondrous Journeys doesn’t deliver much in the way of character development, it will satisfy readers with an appetite for folktales and travel, particularly younger readers who are more interested in excitement than exposition. The descriptions of the various settings were rich, and I wish that we had spent longer in some places, such as Qamar’s time in the palace or her time with Rajna and Fatima, to better appreciate the many landscapes and secondary characters. The story lingers in some locales longer than others, and those were the times when I found myself most immersed in Qamar’s escapades.

Wondrous Journeys will satisfy readers with an appetite for folktales and travel, particularly younger readers who are more interested in excitement than exposition.

If Nimr were to develop some of these shorter adventures into more robust stories in the future, I would look forward to reading them; each of the many quests that Qamar embarks on are worthy of their own novel, as they contain their own challenges and resolutions. As it is, I found that I never quite connected with the book as much as I had hoped, particularly because Qamar is the only character present throughout the entirety of the story. Still, I grew quite attached to many of the other characters whose page time was brief but whose impact on the story was large.

Nimr succeeds in writing a tale that centers Arab women as the heroes of their own stories in an effort to dispel the many harmful stereotypes that exist about them. Nimr’s desire to write for children emerged during the years she spent in an Israeli prison as a result of her political activism, and Wondrous Journeys earned her the Etisalat Award for Arabic Children’s Literature in 2014. Translator Marcia Lynx Qualey is the publisher behind the groundbreaking ArabLit Quarterly, and her talent for translation is showcased in this novel. Translating from any language is always an uphill battle, but Lynx Qualey faced a particularly tough challenge with Wondrous Journeys, in which many of the original Arabic names simultaneously serve as symbols. I applaud the translator for how she has balanced providing the reader just the right amount of context to make the text meaningful without becoming pedantic.

Wondrous Journeys is an imaginative story of one woman’s resilience written from a feminist Palestinian perspective. When you think you know where the story and Qamar are headed next, the scene changes and a new adventure begins. 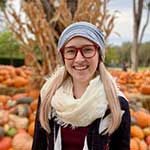 Madison Doyle is a senior with degrees in linguistics and international security studies and minors in Spanish and Arabic. While she calls Texas home, Spain has her heart. She fell in love with Valencia while studying abroad and hopes to return soon to teach English. Ultimately, she hopes to pursue a career that allows her to pursue her love of languages and literature, wherever that may take her.