When I met Emmanuel Carrère in 2014, I had one question for him. I was sent by the magazine I worked for at the time to interview him at a literary festival in which he was participating. Carrère had just published his new book, Limonov, and was already one of the most respected authors in Europe. But, at that time, I had read only one of his books. I had the impression then —and I still do, after so much time—that The Adversary, his acclaimed short novel from 2000, was withholding a secret. And only its author knew the truth. That was my question for him: I wanted to know who the adversary really is.

Carrère was in a hurry. His son had just been in an accident, and he needed to leave for Paris to see him immediately at the hospital. His flight was later that morning, so he only had time for a short interview, over breakfast. We had a twenty-minute conversation about journalism, the media, and his work as a writer and film director.

“I don't know why I choose the characters I choose to write about,” he told me while drinking a cup of dark coffee. “But when you decide to dedicate long hours of hard work to explore, to analyze the mind of a killer, you begin to visit dark places. And you also start to see parts of your own personality that can be quite disturbing.”

Nevertheless, I didn’t have the time to ask my question. I thought it would be best to leave it for the next time we met. I haven’t seen him again since that morning. 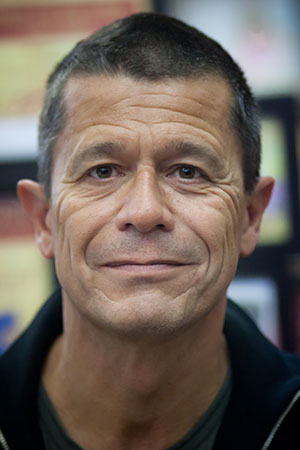 Emmanuel Carrère has become, in recent years, a predominant presence in French literature. After the success of The Adversary, his next books became international best-sellers: My Life as a Russian Novel (2007), Limonov (2011), Lives Other Than My Own (2009), The Kingdom (2017), 97,196 Words: Essays (2019), and Yoga (2020). Even if he’s writing about the history of Christianity, in The Kingdom, or a tsunami in the Middle East, in Lives Other Than My Own, he puts himself at the center of the narrative. It is his particular insight—his sometimes obsessive look at things—that makes his style so unique; he is “ironic, intellectual, self-regarding and confessional,” says Andrew Hussey in a piece for New Statesman magazine. “His admirers—some of whom claim him as France’s greatest living writer—describe his work as autofiction; his critics claim it is nothing more than sheer narcissism,” Hussey continues.

Last month, Carrère was awarded Spain’s prestigious Princess of Asturias Award for Literature. He has a special connection with readers in Spain and Latin America. All his work has been translated and published—mostly by Anagrama, the iconic Barcelona publishing house—and he often travels to literary festivals and book fairs to meet his Spanish-speaking readers. And, even if the Princess of Asturias prize is awarded for a lifetime body of work, this is a recognition for the huge success of his last book, Yoga.

For this new autobiographical novel, he goes deep into his own mental illness. Carrère, who has been practicing yoga for thirty-five years, is at a ten-day meditation on an island when the horrendous Charlie Hebdo attacks happen in Paris. He must interrupt his retreat and go back to Paris to write an article on the attack. Over the course of the following months his life starts to fall apart. First, he has to deal with the racial violence of the murders at Charlie Hebdo. Then, his long marriage comes to an end. The breaking off plunges him into a period of deep depression that will lead him to being admitted to Sainte-Anne’s Hospital and having electroshock therapy sessions. “The problem with autobiographical writing is that you have to find the exact point between glorifying and denigration. There’s as much narcissism covering yourself with praise than spitting and kicking at your own. . . . We’re neither perfect nor glorious, but that’s no reason to hate ourselves,” he said in an interview with the newspaper La Vanguardia.

It is Carrère’s particular insight—his sometimes obsessive look at things—that makes his style so unique.

The Adversary is the story of a respectable Swiss doctor who, in 1993, killed his wife and two children, having previously shot his mother and father and attempted to strangle his mistress. Then he set fire to the family home and took poison, only to be rescued, revived, and charged with murder. The later investigation revealed that Jean-Claude Romand, a family man with a degree in medicine and an impeccable career as a researcher at the World Health Organization, well off and well liked by everyone, was an imposter. Every aspect of his life was a lie. In fact, Romand was never a doctor at the WHO, nor did he have any medical qualifications. His whole life was an elaborate fabrication. The days when Romand claimed to have been teaching in Dijon, or working at the WHO’s Geneva headquarters, had been spent alone.

Carrère found himself almost compulsively drawn to the task of piecing together the identity of the real man behind Romand’s deceptions.

Carrère read about the story in the newspaper and was mesmerized. He immediately felt haunted by the similarities between Romand’s life and his own. He was a writer and also had spent his life making things up. He found himself almost compulsively drawn to the task of piecing together the identity of the real man behind Romand’s deceptions.

Carrère would become a reporter—much like Truman Capote in In Cold Blood—pursuing the psychological and factual details he would need for a book. At the same time, he was looking inward, trying to decipher his own motivations. He kept asking what went on in Romand’s head during those empty hours dragged out in highway rest stops and parking lots. He finally decided to write a nonfiction novel: for that he would attend the trial and interview Romand in prison.

In some passages of the Old Testament, Satan is referred to as the Adversary. In his book, Carrère explores the motivations behind neither a common criminal nor a madman, but rather the actions of someone pushed to the limit by overwhelming forces. He wants to find the adversary in Romand’s mind and make those forces more visible to us.

Carrère chose to create a work of nonfiction with the intensity of a novel. It ends up being an account of how the author relates a story about evil, not just a simple tale of evil. All along the way, he is looking for himself in the mirror of Romand’s actions. One of the most chilling scenes in this tragedy comes at the end of the book. The night of the killings, just after dinner, Romand tells his wife he is having dark thoughts and maybe she can help him stop them. Her answer is frightening: she tells him that it would be better not to talk about it. She leaves him with the choice of doing whatever he thinks is best. We can assume that the woman suspected something about his intentions but chose not to dig further. The adversary’s world could also be a world where appearances matter more than life itself.

But, finally, The Adversary could also be about the writing of the book itself. The monster that awakens in the mind of the creator and never lets him be. Regardless, it is, in my opinion, one of the most intriguing novels in recent years. Reading The Adversary is a disturbing experience but also one that opens up questions about identity and the unknown forces that inhabit us. For me, as a reader and as a writer, it’s a constant reminder of the power—and the risk—of literature. 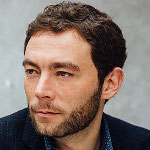 Felipe Restrepo Pombo (b. 1978, Bogotá) is a journalist, editor, and author. In 2017 he was included in the Bogotá39 list of the best Latin American writers under forty, organized by the Hay Festival every decade. He is the author of the novel The Art of Vanishing; three collections of journalistic profiles; and a biography of the painter Francis Bacon. His work has been translated into English, French, and German. He is the editor behind the books The Sorrows of Mexico and Crónica: The Best Narrative Journalism in Latin America. He was the Latin American editor of Esquire and the editor in chief of Gatopardo magazine in Mexico City. He teaches narrative journalism at several universities throughout the continent. He is a columnist at El País and the Washington Post.