“Numbers are the language of the universe,” my father would often say. “The only path to discover the mystery of what we are and what we will become.” No one has ever managed to solve this never-ending puzzle, this magical formula, this infinite equation, the all-encompassing theorem that explains the absolute. From our origins, all the way to our end.

This great enigma that was resolved three months ago, it took me almost my whole life to figure out. I am H. G. Herford, professor emeritus of mathematics at Trinity College, Cambridge, and I preserve the complete equation in my memory.

K, the general in the Joint Command, believes that it’s all just a figment of my imagination, that the numbers don’t exist, that they’re useless. “Where do your numbers live?” he would yell in anger. But if we catch an octopus, we’ll see that it has eight tentacles, if we cut two of them off, the cephalopod will look less symmetrical, it will lose some of its beauty, nonetheless, the number two will not cease to exist.

If you’ve ever counted the petals on a flower, you’ll have realized something unusual. Some flowers have three, five, eight, or thirteen petals, but no flower has the other numbers in between. For example, there are no flowers with one or two petals. Mathematics, numbers, they live there: in the hidden patterns of nature; they’re also present in the modern world, in your computer and your cellphone.

K took me in the fall. I remember it well because that day, I was looking out at the countryside from my window. In the northern hemisphere, autumn starts on September 21 and ends in November; autumnus has an Etruscan root: autu implies the idea of change, of death. I understand death to be a rebirth of the world, because if we can bear the journey of death, as when we are born, we will see the light again. As I was saying, that autumn day I was watching the leaves of the trees, the way they turn red; as the days pass, they change to orange and then take on a dark brown hue. Until they fall, one by one, and only the stalks and branches of the plants remain. For me, it’s a delight to see how the leaves change colors, swirl, and flutter in the wind and then disappear, giving way to winter. And instead of mourning, winter covers the world with a white blanket.

It’s probably snowing outside now; I can sense it because of the cold. I’m being held prisoner, in a building without windows, where I breathe humidity and fear. The walls of the cells and corridors, the offices and torture rooms, are all a leaden gray, like the nest of a dead pigeon.

They’ve tortured me since the day I arrived. The first day I recognized John Mayne, one of my colleagues from the university. He was face down on the “crusher,” that’s what they call the space where some guys in ski masks have fun choking, electrocuting, and ripping out fingernails with metal pliers. “There’s blood,” I told the guard. “He’s dead!” He answered with the same coldness as someone who tells you the time on the street. He kicked him, and I was able to see better that the face of my colleague was disfigured. My hair stood on end, and I started to shake. They stripped me naked right there and gave me a severe beating. John’s blood mixed with mine; they left me unconscious. When I came to, I was completely alone. An intense pain prevented me from opening my eyelids, so I kept my eyes closed, unable to move at all. I could only hear, now and then, excruciating cries from the next cell over.

K says that I’m crazy, that I’m a danger to the world that he’s trying to build; that I make up things, that math and numbers aren’t real, they don’t exist. “It’s all just a figment of your imagination,” he repeats a thousand times. He’s decided to burn my entire collection of manuscripts, hundreds of pages filled with equations and notes. He poured gasoline on the papers and then threw his cigarette butt on the mound of pages. The paper burnt easily, the flame grew like a tongue, bit the air, cracked, and gave off foreboding black smoke. I was condemned to oblivion, I thought.

They inject me with a pink liquid every week; it must be some sort of drug. When the liquid enters my blood, my head descends into chaos, fills up with incoherent information that confuses me. I’ve forgotten various things. For example, I can’t remember volume 3 of Newton’s Principia Mathematica, even though the infinite equation is still inscribed on my memory, that all-encompassing theorem, which explains who we are, from our origins, all the way to our end.

From my cell, I hear the sound of shovels crashing against the snow, against the wet earth. They must be burying skeletons under the heap of snowflakes; every day prisoners disappear. I know because I’ve been able to see some doors open and the cells were empty.

They’ve beaten me again, I don’t know what date it is, I’ve lost count; from these windowless rooms, it’s impossible for me to distinguish between day and night. Then they’ve injected me twice with the accursed pink liquid. Perhaps I should resign myself to being an old blind man in a dark room? Perhaps I should accept K’s idea, that math is useless, that it’s all just something I’ve invented. Despite the electrical shocks, the torture, the drugs, and the extreme cold, the numbers continue to dance, fearlessly, like independent and living creatures in my mind; they dance next to perfect polyhedrons, celestial quadratures, crazed, burning, harmonic. They prance, happy, intertwine, like children, in a cosmic and infinite dance. 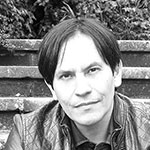 Gunter Silva has published a collection of short stories, Crónicas de Londres (2012), and a novel, Pasos Pesados (2016). He studied law and political science at the Universidad Católica de Santa María in Peru and holds a BA in arts and humanities and also completed an MA in creative writing at the University of Westminster. 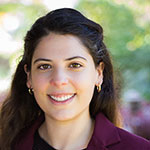 Samantha Vila is a student at the Middlebury Institute of International Studies in Monterey, California. Dr. George Henson, an assistant professor of Spanish translation at Middlebury, is her sponsoring professor.