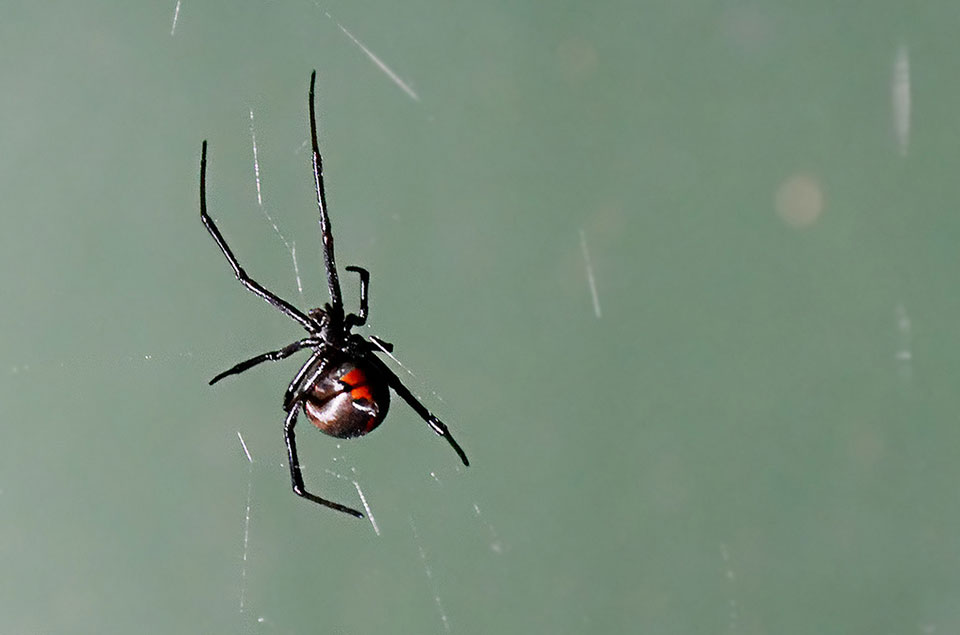 A poisonous spider, a fascinated boy, an indulgent dad, and a cautious mom ignored by all. What could possibly go wrong?

Everyone has their dinner party story. Mine even happened at a dinner party—or at least it ended at one.

Wait, you have to know, before I tell it: my brother used to trap spiders. The best were golden orb weavers that built their webs in the outside corners of the house, spidey legs tracked yellow-black and a pirate skull on a golden back that should have got its message through to him: POISON. Baby orbies, he called them. And he’d fill a glass jar with leaves and sticks so it looked like a miniature artificial rainforest, like the kind they build at the aquarium, inside the giant white dome that’s humid and sweaty and traps in native birds and butterflies. My brother would poke tiny holes in the lid, then fold his cupped hands over the jar, shuffle out the spider into its new orbie home, watch her settle in, legs spindly, crawling up the glass walls.

“Please don’t get a spider bite,” said my mom.

“Cool! What are you going to feed her?” said my dad.

My brother took Mia outside to the backyard garden faithfully. He waited patiently, so still and concentrated, but not for long; the crickets abounded, jumping one after another into his dirt-covered palms that closed around them midair.

Yes, I was disgusted.

Some years later, we moved house, and I came home one afternoon melting from the summer heatwave that poured itself down my back and itched and crept its way up my school uniform tights. Liam and his friends were already home from school, running barefoot in board shorts and shirtless between the pool, the ping-pong table my dad had dusted off and set up in the garage for the boys to start a tournament, and the watermelon my mom was bringing out onto the patio. She wouldn’t let them in the house, not even—especially not—to stand dripping wet in front of the air-conditioner.

Circling around his bare hand, from finger to finger, over and under, scuttled a fat and hairy tarantula, legs so muscular and wiry she looked like a weight-lifter, but with eight eyes, alert and speedy.

As the boys mashed their teeth into slices of the cushiony pink fruit, juice streaming down their twelve-year-old chests and staining the shorts that would just as soon get rinsed with the next dive-bombs in the pool, my brother’s older friend Ben rapped on the open garage door. He lived down the road and had dropped by for a swim.

“And I haven’t come alone,” Ben said. Circling around his bare hand, from finger to finger, over and under, scuttled a fat and hairy tarantula, legs so muscular and wiry she looked like a weight-lifter, but with eight eyes, alert and speedy.

Liam dropped the watermelon rind and ran to Ben as fast as he could, eyes greedy. He scooped the spider up into his hands, palms faced open.

“You have to let her take the lead,” he said, eyes fixated. “Look, see, she wants to go up my arm, so she can.” He was beaming.

In the meantime, my dad pulled out his home video camera, held it up to Liam’s face, zoomed in on the spider that was now creeping around my brother’s neck and collarbone. My dad liked to make videos—especially ones of Liam and me—and then triple-speed them up later and play them as screen savers during home parties he had for his work friends.

“Susan, come and get a look at this!” my dad called.

“Oh my god, what are you doing? Is this even safe? How could you let him do this? Chris, would you stop filming, please, and get that thing off our son before we wind up in the emergency room?”

That was my mom.

The spider was tiptoeing down his chest.

“I have to make myself really still and also slow my heart rate way down. If she can’t tell the difference between me and a tree, she won’t feel threatened.”

Yes, my baby brother was a matter-of-fact little rascal.

“I’m going to take her home so we can do other stuff,” Ben said as he prodded the spider back onto his fingers and let her slink around his palm again. “Do you want to play ping-pong?”

“Sure,” Liam replied. “And actually, we should check for redbacks.” Visibly excited, my brother headed into the garage from the garden. “Dad, did you find any when you hooked up the table?” My dad still held the video camera over his face, recording the scene.

“What do you mean, check for redbacks?” My mom raised her eyebrows at my brother but also, I think, probably, mostly at my dad. “There are redbacks where our children are putting their fingers and bare feet, Chris?”

“Okay, hold on, Liam,” my dad called to my brother, who was already shuffling around in the garage. “We’ll check, but I want you to wait for me. Do you hear me? Liam?”

My dad was shutting down the screen of the camera and putting it back in its case.

“Oh my god. Mom, dad, look! You won’t believe it,” my brother’s prepubescent voice called from the garage. We all rushed to crowd inside, where Liam was crouched under the ping-pong table, neck twisted back into the undercorner, where cold metal on cold metal stored in a dark place made the perfect spot for redback spiders to hide in.

“Quick, Mom, grab me a jar.” Liam had picked up a stick from the garage floor and was eying the spider—one, or maybe many of them.

I couldn’t see, because I was standing back. Like a reasonable person, I might add. You could not pay me a million dollars to wedge myself underneath that rank and redback-infested lair.

“Uh-uh. No way. Liam, you get out from under there, this instant.”

My mom again. She was almost hopping from foot to foot, but I think we were all afraid that to try and pull Liam out might jerk the table and cause one of the spiders to drop and scamper onto his naked back—feeling threatened.

Tongue-licking the sides of his mouth and squinting his eyes slightly, Liam scratched at the corner underneath the table with the stick. Then he stood and turned to face us, holding up the end of the stick to his eyes, so proud in front of his friends, examining the mother redback and her giant white sack that he’d managed to scrape out from their hiding spot.

“Liam, I do not like this. Redbacks are extremely poisonous, and you do not need to be playing around like this.”

He slowly rotated the stick, twisting back up the spiderweb after she dropped down slightly with her eggs—probably to escape. Her bulging black body had a single stripe of blood-red color, like an exclamation point: DEADLY.

“Liam, we are not keeping a redback in a jar.” My mom was trying to put her foot down. “We probably need to kill the eggs before they hatch. Chris, can you help me with this, please? I need you to step in right now.”

“Wait, no, Mom, please,” my brother begged. “Can’t we just keep them in a jar, and we won’t put holes in the top, so they can’t get out. We’ve never seen redback eggs hatch. Please, let’s just keep them in the jar, and then eventually there won’t be enough air. It’ll be fine.”

To this day, I do not know why my mom agreed to that arrangement.

“But Chris, I need you to call the exterminator to check the garage for others. Kids,” she looked hard at Liam, “I do not want anyone going into the garage until we make sure it’s safe. That means no more ping-pong today.”

My brother barely responded, busy as he was lowering the spider and egg sack into a jar that my dad had brought out. He reached for a twig from the garden and plopped it in.

“She should have something to walk around on,” he said, in explanation of his flora choices. “But we still want to be able see what happens.”

For the next week the redback jar stood at the center of the banana leaf my mom laid out on the patio table—like the spiders were a centerpiece or something. The following weekend my dad had a dinner party with people from his office.

For the next week the redback jar stood at the center of the banana leaf my mom laid out on the patio table—like the spiders were a centerpiece or something.

Remember, I told you I would get to the dinner party, but I bet you can’t guess where this is headed.

Well, the eggs hatched, just in time for the party. Teensy-weensy legs and eyes spilling from the white case that crumpled, like the mother had eventually, as she slowly suffocated and folded each of her black needle-pointed legs into herself.

At the party, each guest was given endless glasses of wine, and the spider jar got passed around the table, continuously examined like an exotic relic. No one—not even my mom—thought to remove it from the center of the table.

Before I go on, it’s also important that you know something about my dad. In addition to drinking a lot, he liked to make simple meals that appeared outrageously complex. Like raw salmon cutlets, sealed in an aluminum “packet” filled with sauce, and then steam-cooked inside the barbeque on the patio. This particular evening, as soon as he and his colleagues got to drinking enough, he’d chop up the salmon and show everyone how easy the whole thing really was. Eventually, he’d start throwing the raw pieces of salmon into a bowl, douse them with sauce, and then pull out his crème brûlée torch and start searing the fish directly on people’s plates, like he was some kind of obnoxious (and extremely embarrassing) chef-performer.

My brother and I left the table after dinner. I went to read in my room before going to sleep. Downstairs the guests began to trickle away, one by one. I heard my mom stack the dishes in the sink and go upstairs, and my dad kept drinking and got boisterous, but in a far-off kind of way that I was only half-hearing from below on the patio, out through my bedroom window.

“Holy mother of effing god!” It was Gavin, one of the stragglers still down at the party.

“Would you cool it with the language?” I heard my dad say through ruckus laughter and slurred intonation. “My kids don’t need to hear that.”

And then I heard the following.

“Watch it! They’re getting away!”

“Quick, get a handful of water from the pool. Maybe we can drown them out.”

“Holy crap. Are they coming at me? I can feel them on me!”

“Wait, do they like water? Maybe they can swim.”

“Wine! We should try wine. Just dump a glob of it out onto the pavement. Let’s see what happens.”

“Do you have a torch? I can’t see a damn thing out here. Don’t you have pool lights?”

“The blowtorch! Let’s burn their legs off!”

My dad and Gavin were quiet.

And then I heard the torch ignition blowing. 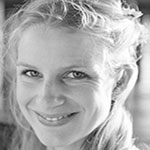 Nicole Adair has been a poetry writing fellow at the Iowa Writers’ Workshop  and is currently completing a PhD in comparative literature at UC Berkeley as well as a concurrent MA in English and creative writing.

As Popular as a Soccer Star

Mural in Cartagena / Photo by Kirk Siang / Flickr In Colombia, the popularity of Gabriel García Márquez rivals that of...
July 22, 2021 | Peter LaSalle
Culture