It’s 12:30 p.m. and her pale-blue blouse is soaked in sweat, her white linen pants are covered in specks of dust, pollution and sweat have faded the nail polish that made her nails shine this morning, her feet are swollen, made ugly by fatigue, inside her high heels. After about an hour of walking through the cemetery, she has just arrived in front of her father’s grave. The Gravedigger is there and won’t stop talking. He’s boasting. Without him, she would never have found it. She would have been scammed by the others, by the candy vendors and handkerchief sellers, shoe shiners, manicurists, pedicurists, all the vendors that crisscross the paths, going between the graves to offer top-of-the-line remembrances of tobacco, coca leaves, handkerchiefs, waxed shoes, groomed toenails, soaked-up tears and sweat. There are also children in the streets that wait for burial services, watching them, and once the ceremony is over, go to the open grave to strip the body of its fancy suit and its valuables. The Gravedigger makes do by helping the living find their dead for a bit of money. He also offers to clean the graves, remove the surrounding trees and then replant them, lay flowers, while also offering an account of who comes to reflect, at which grave, in what outfit, how each one cried, how they settled family conflicts concerning inheritance, how the wives—more or less legitimate—tear each other apart. For ten years now, this has been his bread and butter. Everyone in this neighborhood calls him the Gravedigger. The Digger, as he is known to his closest collaborators, is never far from Docta, his childhood friend and accomplice. Docta is a nickname for Doctor of Law, but his real name is Cyprien. His alias comes, as everyone knows, from his practical and theoretical knowledge, both real and purported, of international law and, more specifically, of laws concerning migration. He knows all the official and unofficial ways to leave a country legally and illegally. He is able to offer counsel on possible solutions to deportation and the strategies to bypass an entry ban in one of the member states of the European Union. This expertise earns him the title of Doctor, which, with time, has transformed into Docta. When he isn’t “at work” doing business, he is in the cemetery, with the Digger, attempting to make a fortune off funeral services: funeral plaques, flower arrangements, tombstones, announcements, and cocktails. It’s half past noon. The Digger, assisted by Docta, escorts her to her father’s grave. The Digger is boasting. Without him, she never would have found it because you have to be clever to find something in this cemetery. You have to come often to understand how it works, and she had only been there once in twenty-five years.

Without the Digger, she never would have found it because you have to be clever to find something in this cemetery.

It was a very long time ago, when she still lived here. The first time, it wasn’t for her father. It was well before that. It was for their burial. There were five of them. Not one survived. It had happened one morning, on the way to school. It’s dangerous to go to school in this city. Few parents know that. They think it’s going to school that will make everything better. In this family, there were five. They died on the way to school. After that, how would you like to force a child, who didn’t want to go to school, to go to school? In this country, you have to listen to children more often. You have to listen to them as soon as they say their first words, in the beginning, when they learn to speak. After, it’s too late. After learning to speak, they learn to lie because it’s useful and it’s necessary in this city. So, you must listen to all young children, even those who still cry when they are hungry or tired, those who call out for Mama when they feel bad because she is still there, and she can still listen, and she can still do something. After, it’s too late. Mama is no longer there. Mama is tired, annoyed, hungry, angry. Mama is poor, weak, withered, in pain. In most cases, she is cheated, wrong, swindled, disfigured, pale.

You have to listen to them as soon as they say their first words, in the beginning, when they learn to speak. After, it’s too late.

But this morning, Mama is there. She, the youngest one, didn’t want to go to school. But Mama wanted a better life for her daughter. And this life would be found by going to school. So, she needed to go without delay, get in the car without hesitation. Three girls, two boys. Five children and a drunk chauffeur. Five, plus one full of five to six bottles of beer. Five to six bottles to start a ten- to twelve-hour day of his measly job that earned him too little money to carry out yelled commands, to drive around on potholed roads, with all the road-hogging drivers to face. Five to six bottles for ten to twelve hours of too much and nothing for a next-to-nothing salary. Five to six bottles that would cost exactly five lives. The oldest of the girls was her friend. When it happened, she was thirteen years old. There were five, none survived. It happened on a Tuesday morning on the way to school. The car was new, a Volvo imported from Germany. At 7:15 a.m., it struck a truck. The three oldest ones died on impact. When onlookers had gathered in the area, the youngest brother was still breathing. He died ten minutes before his mother arrived. The youngest girl held on for a few hours. She repeated, her face bathed in blood, that she never wanted to go to school again. Four hours after the accident, none of the siblings were left. Twenty years later, her memory is intact. She found their five graves without trouble and spent a moment there in silence before asking how to find her father’s grave. 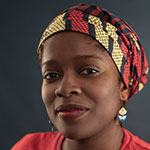 Born in Kinshasa in 1975, Albertine M. Itela spent her childhood between Belgium, Germany, and the ex-Zaire before settling in France. After graduating in political sociology at the Sorbonne, she published several articles for Radio France Outremer before becoming an actress, theater teacher, and dramatist. “Gare du Nord,” published in Kanyar, is her first published short story. She is currently working on a collection of stories about women at the time of the independence of Congo-Zaire. 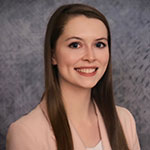 Mariah Rust is currently earning a master’s degree in translation at the Middlebury Institute of International Studies. She graduated from Barnard College of Columbia University in New York City in May 2020 with a bachelor’s degree in French literature and translation. Apart from being a now-published translator, Mariah is also an accomplished Scottish Highland dancer who has performed in France, Belgium, Germany, the Netherlands, Canada, Scotland, Russia, and China.