The Festival Five with Author and Translator David Bellos 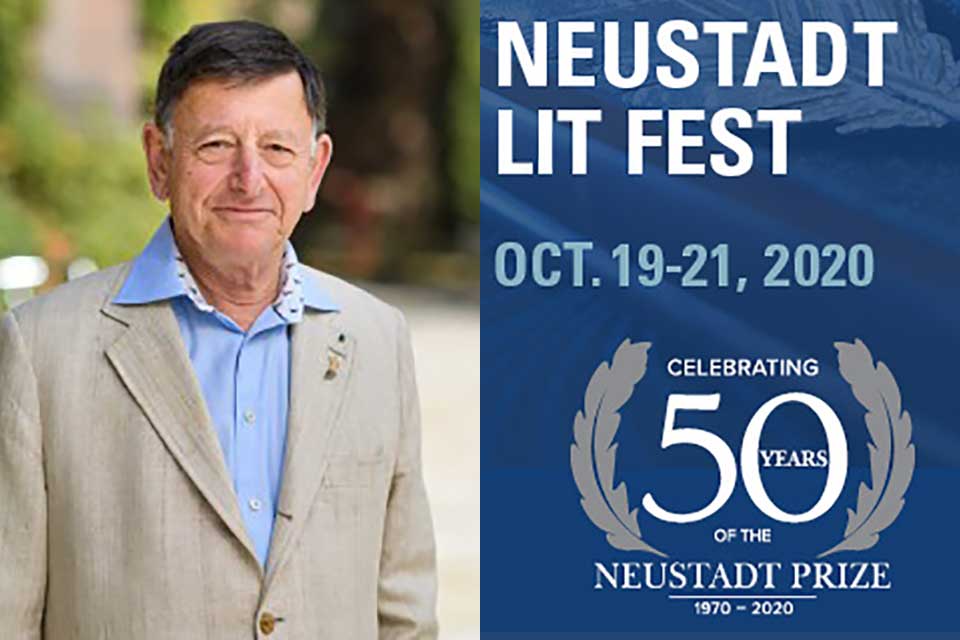 Get to know the participants of the upcoming 2020 Neustadt Festival in this series of short interviews. First up: David Bellos!

David Bellos is a professor of French and comparative literature as well as director of the Program in Translation & Intercultural Communication at Princeton University. Educated at Oxford, he has written biographies of Georges Perec and Jacques Tati that have been translated into many languages, and an introduction to translation studies, Is That A Fish in Your Ear? He has translated numerous authors from French (Perec, Vargas, Kadare, Simenon, Antelme, Fournel) and offers a new understanding of the extraordinary life and work of Romain Gary in Romain Gary: A Tall Story. His latest book is a study of Victor Hugo’s masterpiece, Les Misérables. He will participate in three events at the festival: A Panel on Literary Translation, Why Should We Read Ismail Kadare?, and he will read Kadare’s acceptance speech during the Neustadt Prize Award ceremony.

Q: In your book Is That a Fish in Your Ear?, you write about the commercial considerations driving retranslations and the perils of retranslating. Is there a classic you would be willing to retranslate?

A: Well, I did retranslate one book: Georges Simenon’s Pietr the Latvian (1931), the first of the detective novelettes to feature Inspector Maigret. But I treated it as a new translation; I’ve not looked at the version that was done in the 1930s even now. My one regret is that the rights-owner and the publisher didn’t allow me to use either of my two favorite titles, Baltic Pete and Riga Mortis.

The only classic work I’ve ever been asked to retranslate is Balzac’s short story, “Sarrasine,” the one Roland Barthes tried to take to pieces in S/Z. I’ve written about Balzac’s work many times over the years, and perhaps that is what inhibited me from finding a voice for him in English. All I could think of doing with him were pastiches—Hemingway-esque, Wodehouse-ish, and so forth. In the end, I gave up.

Q: What are a few of your favorite translations?

A: Most recent: Mark Baczoni’s translation of János Székely’s Temptation. A wonderful book! Most beloved: Rosemary Edmonds’s War and Peace. Most admired, despite and mostly because of the unpleasant criticisms made of it: Deborah Smith’s version of Han Kang’s The Vegetarian. Most stupendous: Srinath Perur’s translation of Vivek Shanbhag’s Ghachar Ghochar. These are translations from languages I do not know (Hungarian, Korean, Kannada) or know not well enough anymore to read with pleasure (Russian). When it comes to world literature, I read not as a translator, but as a reader.

Q: We’ve asked our NSK Prize jurors about the books that turned them into readers. Is there a book that led you to translation?

A: Absolutely. In 1981 I read Georges Perec’s La Vie mode d’emploi and was bowled over by it to the extent that I wanted to share it with others. That’s the first novel I translated. I never tire of repeating: Perec’s Life: A User’s Manual taught me to translate, made a translator of me, made me realize how important—and how enjoyable—translating is.

Q: You translated Ismail Kadare’s Twilight of the Eastern Gods from Jusuf Vrioni’s French translation, using French as the intermediary language. When you’re working through an intermediary language, do you work exclusively with that text, or do you find yourself consulting with the author of the original?

A: I have only worked through a relay language in the case of Ismail Kadare, and I am fortunate indeed that Kadare was and is always willing to help. And to unhelp, by rewriting paragraphs and sentences specifically for the translation! (Our shared language is French, not Albanian.) But in the case of Twilight, we had some disagreements. The book is set in Moscow, so the Albanian original has to be understood as reproducing dialogues that were “really” held in Russian. That aspect is completely occluded in Vrioni’s French translation (and in line with established French traditions of domesticating all foreign names and expressions). I sought to Russianize the English text in the ways in which it would have been expressed had the work been translated from Russian. It’s quite complicated. But Kadare, who was educated in Moscow and is completely fluent in Russian, is now almost embarrassed by the linguistic multiplicity of a work written in the 1970s, and would have wished for the Slavic undercurrent in text to be canceled out. On this point, I prevailed. But mostly, obviously, it is Kadare who prevails!

Q: Your most recent book is The Novel of the Century: The Extraordinary Adventure of Les Misérables. Why did you choose to write the story of this book?

A: Well, I began by trying to write a general book about the novel, in the way Is That a Fish in Your Ear? is a general book about translation. But as I dabbled with the project I found myself referring to Les Misérables again and again, and so it struck me that maybe the best book about “the novel” would be a book about “that novel,” the summit of the novelistic mode, and the one that contains all kinds of novels, sometimes condensed to a paragraph and sometimes spread across hundreds of pages. So that’s how I got into it. But I also learned from writing it that Les Misérables expresses many thoughts and feelings that I share, and that I would be very happy to have others share too. Despite being “the novel of the nineteenth century,” it is also, quite urgently, a novel for twenty-first-century America too.