A Conversation with Chuck Beard

With independent bookstores closing even in those cities where they typically thrive, opening a new bookstore is an act of bravery, perhaps even faith. When Chuck Beard founded East Side Story, he not only opened a new bookstore but also Nashville’s first bookstore dedicated exclusively to local authors. What was he thinking? 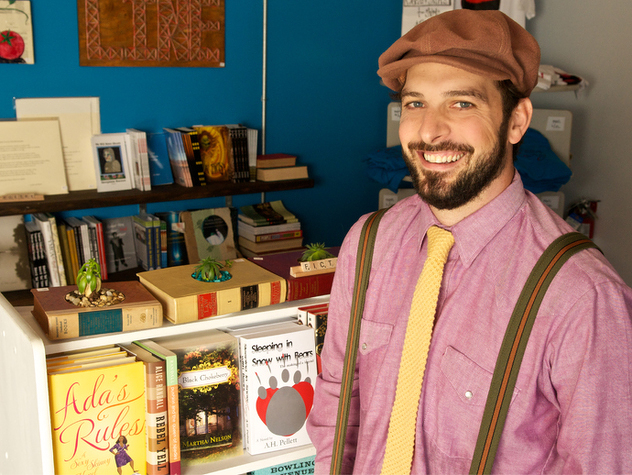 Chuck Beard inside his bookstore East Side Story.

WLT: The story of Nashville’s independent bookstores is well known: all of Music City’s bookstores closed, and then Ann Patchett and her co-owner opened Parnassus Books to fill the void. And then you opened a bookstore just for local authors. What were you thinking?

Chuck Beard: Some might have been saying that very comment of “What was I thinking” without a question mark on the end of it when I first decided to make my idea a reality. Lucky for me, I never heard them or ever listen to people like that. The answer is a simple one, as always, looking back in hindsight and being in that moment of inspiration and action. It really wasn’t a decision—or a decision of opening a bookstore. It also didn’t have anything to do with Ann Patchett or the documented history of the Music City bookstores closing. It was an idea that came from the necessity of having a connected community of creative writers, aspiring and well-known, to thrive together as we continue to develop and write the stories we want to write, help each other get to where we want to go, and promote and do whatever we want to do with the finished works once we get there. That initial idea, which I shared with several other writing friends, was met with an overwhelmingly positive response by friends and new people crossing my life at just the right place and time, making me feel like making East Side Story happen was the right thing to do. Plus, I have an amazing, supportive wife (artist efharper) that believes in my good ideas and tells me when I need to go back to the drawing board for the others. East Side Story is more of a story itself than a typical bookstore. There is no concrete or unchangeable structure to what we are trying to become. It is something special—whatever the community and everyone involved makes and will make it. I just opened the door, simply put, but there are a lot of good people that built the foundation, the location, the door, and have written some groundbreaking works to fill the shelves and showcase Nashville beyond music.

WLT: You seem to be combining literature and what Nashville is best known for, music, in your radio broadcasts from a local brewery. What are you doing there, and how can people access these shows?

Chuck Beard: The live event/radio podcasts are called East Side Storytellin’. I began them on election night in November 2012 and have been doing them every first and third Tuesday since. Again, it felt like an obvious, fun thing to do that I and others wanted to make happen, so we decided to act on it. Although the location has changed and will change, the template has pretty much stayed the same. I introduce the show and the featured writer, and the author talks about and reads excerpts from his or her books, sold on site and at East Side Story. After that, I introduce the featured musician(s), who perform a storyteller set of originals as they describe the origin of the songs before performing them. After the music, I have all of the featured guests back up on stage together to talk about their various creative processes, journeys, and personal connections to Nashville. Again, it’s an obvious idea in my opinion, and one based on necessity: bringing together so much talent in one city in inspiring settings and encouraging creativity to the masses. The event has always been free to attend so that the crowd can support the location by enjoying the show with food, spirits, and the option of buying the merch from the featured guests. We’ve also had original art prints to showcase the shows by a good friend and talented artist, Alex Smith. You can see past shows if you click on the “In Our Own Words” tab on the East Side Story website (www.eastsidestorytn.com) and click on any of them with the “East Side Storytellin’” title beside it (numbered for the specific show featured).

Chuck Beard: It really depends on what you are reading. If you love local history, nonfiction and fiction, Ridley Wills II and Robert Hicks are the scribes for you. If you love mystery and thrillers, J. T. Ellison is the best clue I can give you. If you’re into experimental fiction, Todd Dills and Chet Weise could be your best fits. If poetry is the word, I suggest taking a glance at rising stars Ben Burr, Jamie Zoe Givens, and Nicole Branigan. If food is what you crave, try Jennifer Justus and Chris Chamberlain. If music is your thing, you need to listen to Craig Havighurst, Barry Mazor, and Jewly Hight. And if you want to know the future of Music City’s literary fate, read anything and everything by the prolific supernova Victoria Schwab.

Chuck Beard: That first novel you are talking about is called Adventures Inside a Bright-Eyed Sky, and it was a very special project from the start. I wrote it some years back while traveling abroad. It’s a fictional tale of an ordinary adventure through the eyes of an extraordinary twelve-year-old boy and the people and situations he experiences. You really have to read it to get a better picture—the bookstore proprietor and not the writer writing here, of course, and I’m not going to stop you from getting it for yourself. In the process of being rejected by the typical agents and publishers, I decided I wanted to get it out the way I wanted to do it. I had several close friends read it, and they all loved it. Serendipitously, there was a character in the story that dealt with cancer and all of those close friends mentioned had also experienced some sort of conflict with cancer. One ended up painting the beautiful cover. We decided to bring the others (an accountant, a lawyer, and a businessman) together to form a registered 501(c)(3) nonprofit called “Adventures Inside a Campus for a Cure, Inc.” to be middlemen and event planners to raise money and awareness for research and support for those fighting cancer without taking a cent for ourselves. That idea and cause grew out of an idea of doing something fun, good, and more than ourselves. Now I currently donate all of the sales from my book sold at East Side Story to Gilda’s Club Nashville, a nonprofit near and dear to my heart doing great things locally. Right now, as I am writing various other projects, I have been using my original Adventures as a demo. I guess you could say it’s my own musical demo of sorts in Music City at the moment.

WLT: Nashville’s a songwriter’s city. What is your view of lyrics as literature?

Chuck Beard: In the end, a good book and a good song have the exact same thing in common: a good story set into words. The only real difference is the time put in and the length of the project. A song is typically three minutes, but I don’t think anyone ever wrote a three-hundred-page book, ready to publish and read in final form, in an afternoon on Music Row. But yeah, it’s all about a good story in either case, and that can always be appreciated at the core by anyone with half a heartbeat.

WLT: Besides your own store and broadcast event, what is the one place a bookish visitor to Nashville shouldn’t miss?

Chuck Beard: The Downtown Public Library (along with visiting the other public libraries in the area too, obviously). Everyone should support and take full advantage of their public libraries, no matter where they call home. I think we have some of the finest around, mixing remarkable history with fiction and nonfiction stories just waiting to be taken home and returned to share with others for free. It’s the only tangible place in our modern society where it’s 100 percent devoted to words with the local government’s help and mission to build a smarter, creative, and literate community, in my opinion.

WLT: Thanks for participating in this interview, Chuck, and happy first birthday to East Side Story.

The Nashville Poems by Ben Burr

Right by Her Roots by Jewly Hight

A Guitar and a Pen by Robert Hicks

The Snow Whale by John Minichillo

Reasons for and Advantages of Breathing by Lydia Peelle

A City of Ghosts by Betsy Phillips