Bob Dylan wins the Nobel Prize in Literature, how poetry and math overlap, and more 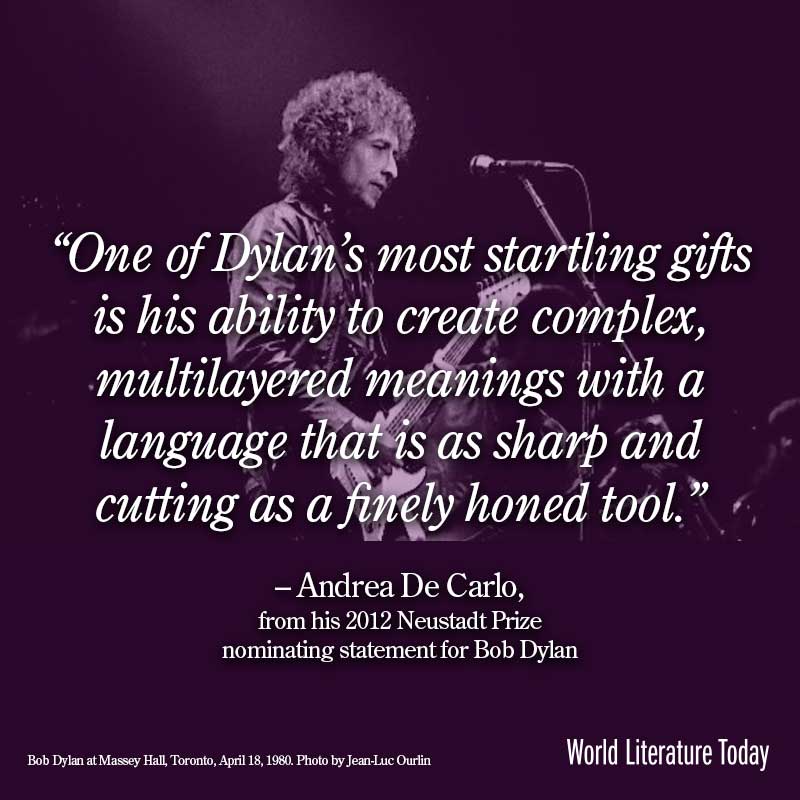 Bob Dylan (a 2012 finalist for Neustadt Prize) was awarded the Nobel Prize in Literature on Thursday “for having created new poetic expressions within the great American song tradition.”

NSK Neustadt Prize juror Marjorie Agosín joins in this interview with the Forward to discuss why so many South American Jewish authors write about oppression.

“Ngũgĩ wa Thiong’o: The College Years” is an excerpt from his newest book, Birth of a Dream Weaver: A Writer’s Awakening.

Watch recent Neustadt Prize juror Amit Majmudar in this Book Notes interview where he discusses how poetry and mathematics overlap.

Majmudar also discusses the meaning of “order and stability” in this Kenyon Review article that examines society’s ongoing dialogues on violence, rioting, and the current political climate.

Via the New Statesman, Howard Jacobson champions the value of the comic novel looking at Ulysses, Herzog, and more.

NSK Prize laureate Katherine Paterson shares her reaction to the film adaptation of her book The Great Gilly Hopkins and explains why it took so long for the book to make it to the screen.

Recent WLT contributor Adonis chats with Literary Hub about the failure of the Arab Spring.

Three Percent shares “early gems” in the hunt for the Best Translated Fiction of 2016.

Check out these interactive maps by My Poetic Side where you can flip back and forth to see the countries represented by past Neustadt and Nobel Prize laureates!

Via Slate, these “82 funniest books by living writers” were selected by more than 30 authors who are also known for their humorous prose.

Salvador Dalí’s surrealist cookbook Les Diners de Gala is being reissued for the first time in more than 40 years.