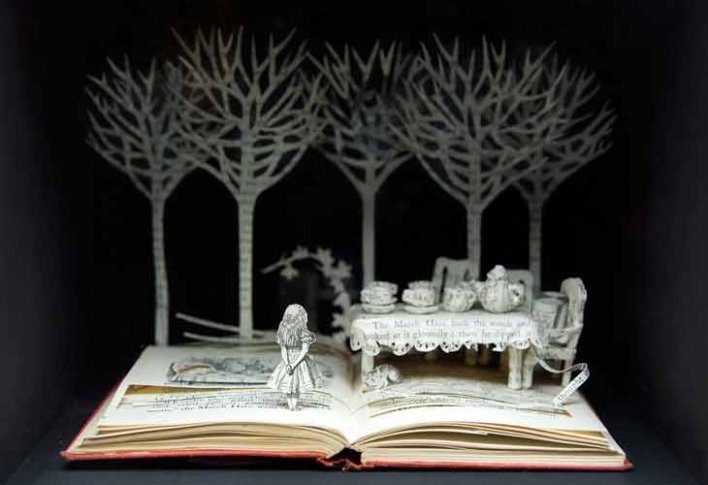 From Art Made from Books: Altered, Sculpted, Carved, Transformed

New partnerships and discoveries are at the heart of this week’s lit links. Two new poems authored by Sappho were uncovered and translated this week, making headlines across the literary world. You’ll find links to the poems and scholarly commentary in the links below.

Gerald Stern is the latest poet to receive the Frost Medal, which yearly honors poets for lifetime achievement. (We are currently offering two Gerald Stern books as bonuses for yearly subscriptions to the magazine.)

PEN International announced a new partnership with UNESCO this week, with the pair hoping to bolster minority language publishing in Kenya, Serbia, Haiti, and Nigeria.

Poet and scholar Dick Davis has spent his life bringing the works of Persian poet Hafez to Western readers. In this new Poetry Foundation video, he explains his experience with Persian culture and translating the medieval poet.

Last year could reasonably be considered the year of the short story, but we wonder, is there such thing as a model short story?

As the Winter Olympics in Sochi begin, PEN America draws attention to the state of Russian literature today.

Valentine’s Day is next week, and the Code Switch team at NPR wonders if the act or feeling of love can truly be translated across languages.

Two new poems by Sappho were discovered this week.

Words Without Borders is hosting an evening with Leonardo Padura on February 26 in New York City. (For a peek into Padura’s work, see his essay “Writing in Cuba in the Twenty-first Century” and his fiction piece, “The Pendulous Death of Raimundo Manzanero” from the May 2013 issue of WLT.)

The Literature Across Frontiers calendar spans the globe and the year with literary event and writing workshops.

Who doesn’t love literature and food? Here’s a recipe to enjoy this weekend: Mary Shelley paired with kale and fried egg tartine.

Before you think about tossing out that old or worn book, think about all of the creative book sculptures you could create!

Last year, the Oxford English Dictionary chose “selfie” as the word of the year. But the American Dialect Society disagrees—it was definitely ”because.”

What do you get when you cross machine learning with poetry? An MIT PhD student tried the formula and got a Shakespearean sonnet.

What does it feel like to be an enemy of the state? This reading list by Gillian Slovo at the Free Word Centre provides first-hand accounts.

This Valentine’s Day, consider giving a gift of poetry—it’s a gift that keeps on giving.