The Tournament of Books, a human book chain, and more 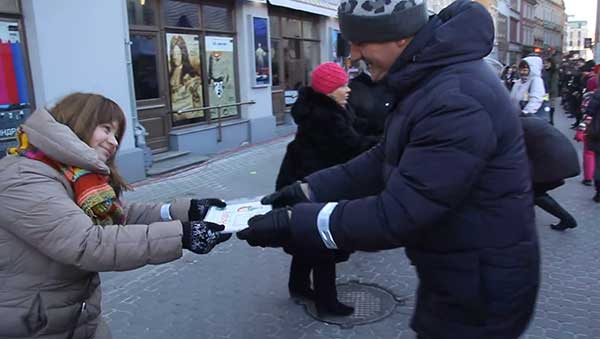 Fun Finds: Watch the video of 14,000 Latvians who formed a human chain to deliver books to a new library.

Liu Xia, wife of Nobel Peace Prize laureate Liu Xiaobo, is still contained under house arrest in China. Despite her lack of freedom, however, she still finds ways to be heard, most especially through her virtual poetry readings.

Ahlem Mostaghanemi is widely considered one of the most popular female writers in Arabic literature. As successful as her books are, does she have a chance at success with English readers?

A new study shows that, overwhelmingly, Americans still prefer to read physical books over ebooks. (For another perspective, revisit Andrew Piper’s essay, “Beyond the e-Book,” from the November 2013 issue of World Literature Today.)

Goodreads recently interviewed Ishmael Beah, author of A Long Way Gone, his memoir of being a boy soldier in Sierra Leone.

Lisa Rose Bradford, longtime friend and translator of the late Juan Gelman, reflected on his life and literary works at the Words Without Borders website this week. (She also talked about translating Gelman on our blog, calling it “The Translator’s Greenhouse.”)

Is a library without any books still considered a library? For residents in Bexar County, Texas, the new BiblioTech extensions that provide all digital reading are almost preferred to physical books.

Mukhtar Mai’s story of surviving gang-rape and the oppression over women in Pakistan recently debuted in New York as a full-length opera.

If you live in London and want to learn more about Asian Languages, Asia House has a series of language workshops throughout February and March.

Each year, the Morning News assembles a panel of prestigious literary judges to choose the previous year’s Rooster (best book) in the Tournament of Books. This year, the longlist candidates include Herman Koch, Donna Tartt, and 2014 Neustadt laureate Mia Couto.

Did you know that Jorge Luis Borges had a sister? It turns out she was a very accomplished artist.

A team renovating Al Purdy’s house found, not surprisingly, a poem hidden in the walls of the house.

To mark Riga as the 2014 European Center of Culture, 14,000 Latvians formed a human chain to deliver books to a new library.