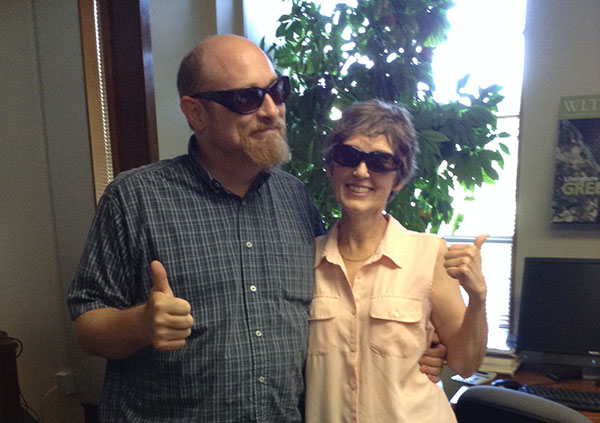 The editors of World Literature Today each have a colored editing pencil: mine is purple, our editor in chief’s is blue, and our book review editor’s is green. When Marla Johnson retired last week after twenty years, she passed her green pencil on to Rob Vollmar, WLT’s new book review editor.

In doing so, we welcomed a longtime friend to a new role. A former contributing editor, Rob has contributed reviews, an interview, and essays throughout the past decade. Beyond our pages, he’s the author of more than one hundred reviews and three graphic novels: The Castaways (2007), Bluesman (2008), and Inanna’s Tears (2011). He and his wife, Shayna Pond, are working on a fourth, Howling at the Gates. He often presents at libraries on manga, anime, and comics, and has spoken about censorship in comics at the Oklahoma Library Association’s annual meeting.

His first literary obsession, though, was Thomas Hardy, followed by Wallace Stevens, William Faulkner, and Tennessee Williams. But as a child who moved to ten different cities during twelve years of school, he found some comfort in comics because comics were the same wherever he went.

Like Marla, Rob has both strong analytic and creative sides and brings an essential open curiosity to the job of WLT book review editor. The green pencil is secure. We anticipate Rob continuing the broad, excellent coverage Marla brought to our pages and look forward to seeing how he adds his own mark.