No person, no pillar of light, the undead
Just a kiss fixation's victuals
Fishbitch or valor, heart beats faster
Leaving the imprint of one shoe

The stifling incense smell, carnations on the table
The reeking of the freshly drowned man
To the ragdoll string contraption
Add on her sculptural visage

And in the colorless aircraft capsule
He'll gulp down sky-sky ripened fumes
And dance the dance of drunken skeletumes
His foot not finding the earth. 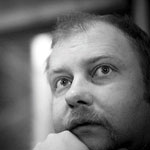 Viktor Ivaniv was born in 1977 in Novosibirsk. He is the author of three books of prose, Gorod Vinograd (2003; Vinograd city), Vosstanie grez (2009; The uprising of daydreams), and Dnevnik nabliudenii (2011; Diary of observations) as well as a collection of poetry, Stekliannyi chelovek i zele-naia plastinka (2006; The glass man and the green record). His writing was short-listed for the Debut Prize (poetry category) in 2002 and the Andrei Belyi Prize (prose category) in 2009. Ivaniv currently lives and works in Novosibirsk as a librarian at the State Public Scientific Library.

Maya Vinokour is a second-year doctoral student in the Program in Comparative Literature and Literary Theory at the University of Pennsylvania, specializing in themes of spectatorship in modern Russian and German literature. Also a translator, Vinokour won Academia Rossica's Young Translator Award in 2011. Eugene Ostashevsky is a master teacher in the Liberal Studies Program at New York University. He has published two books of poetry with Ugly Duckling Presse: Iterature and The Life and Opinions of DJ Spinoza. His work as translator includes OBERIU: An Anthology of Russian Absurdism (2006), a selection of 1930s underground writings by Alexander Vvedensky, Daniil Kharms, and others in their circle.