what came over me

I gestured at outlets
cozied up to the circuit box, held the meter close

no one is buying it

here's my license, look, my certificate
wires sticking out of all my pockets

they just look at me in silence

what kind of people are you

they shake their heads doubtfully
we can't use you, they say

we need an electrician 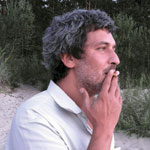 Semyon Khanin was born in Riga, Latvia, in 1970. He is the author of two collections of poetry in Russian, Tol'ko chto (2003; Just now) and Opushchennye podrobnosti(2008; Missed details). His poetry has been translated into Latvian, English, Czech, German, Italian, Swedish, Estonian, and Ukranian. He is a participant in the literary project Orbita and editor of the almanac by the same name.

Julia Bloch is Assistant Professor at the Bard College MAT program in Delano, California, and an editor of the online poetics journal Jacket2. She grew up in northern California and Sydney, Australia, and received her PhD in English literature at the University of Pennsylvania. Her book Letters to Kelly Clarkson is forthcoming from Sidebrow Books; she has published poems recently in Aufgabe, P-Queue, and Peacock Online Review. Karina Sotnik was born in Riga in 1965. In addition to her translation activity, she works in the high-tech industry as a consultant for international business development. She also imports linen products from the Baltic region to the United States and designed her own line of children's bed linens, Linu Baby.