a poem about Lillebror and Karlsson

NB: Karlsson on the Roof and its sequels, the children's books by Astrid Lindgren (best known in the English-speaking world for her Pippi Longstocking), are immensely popular in Russia, where they served as the basis for a beloved cartoon series. Their main characters are a little boy called Lillebror ("Junior") and a chubby little man named Karlsson who lives on the roof. Karlsson flies by means of a propeller on his back, activated by a special button on his belly. He is tremendously arrogant and gluttonous and tends to get Lillebror into trouble; he repeatedly describes himself as "handsome, clever, and moderately plump."

. . . Karlsson hocked a loogie past
the trashcan and flew away
– Danila Davydov

you wait while your black eye fades
wake up dead and stop sleeping altogether
and one fine day read on the kitchen wall:
"You'll never grow up Lillebror"

For a biographical profile of Kevin M. F. Platt, see "Poetry in the Cloud: An Experiment, Results, and n+1 Hypotheses". 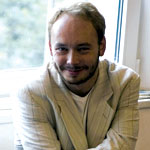 Igor Belov was born in 1975 in St. Petersburg and currently lives in Kaliningrad. He is the author of two books of poetry: Ves' etot dzhazz (2004; All that jazz) and Muzika ne dlia tolstykh (2008; Music not for fat people). His poetry has been translated into Swedish, German, Polish, Estonian, Ukrainian, and Belorussian, and he has been recognized with awards and grants in Russia, Sweden, and Poland.

Maya Vinokour is a second-year doctoral student in the Program in Comparative Literature and Literary Theory at the University of Pennsylvania, specializing in themes of spectatorship in modern Russian and German literature. Also a translator, Vinokour won Academia Rossica's Young Translator Award in 2011.