I want to tell you simple truths,
Reveal important things to you.
Always open doors, step into elevators,
Go upstairs, move down corridors.
Always get into cars, start the engine,
And if it's winter, wait until it warms up.
Always spend money, but sparingly,
And only once in a while spend everything you've got.
In summer it will be summer; in fall it will be fall,
Don't get flustered; don't do anything that disgusts you.
Girls will become young women, and then you'll notice them
Crossing the street holding little kids' hands.
Men will somberly weigh the options
But then act according to circumstances, often making mistakes.
Governments are made to fall;
Ships – to glide beneath bridges.
All the same, the lights on the other side of the river
Will never – imagine that – never go out.
Still, if they do, pack your bag –
Only the essentials – and leave the city immediately.
When you arrive in a new place, look around, lean against a tree;
You can light up – if you smoke – stand around, think.
You see, here too in the evening they drink tea and in the morning, coffee.
Blame the mayor and wait for things to get better.
And if there is a river and you see lights on the other side,
That's something to cling to. 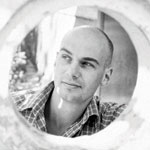 Sergej Timofejev is a member of Orbita, a creative collective of Russian poets and artists, as well as a Riga-based journalist, translator, and DJ. Since the late 1980s, he has published in the journals Rodnik, Mitin zhurnal, Vavilon, Znamia, and others. A pioneer of video poetry in Russian, his first video poem, "Orchestra Rehearsal" (1995), may be seen on YouTube. Timofejev is the author of six books of poetry, three of which were published in Latvia and three in Russia. He was short-listed for the Andrei Belyi prize in 2002. His poetry has been translated into several languages.

Bob Perelman is a poet and Associate Chair of the English Department at the University of Pennsylvania. He has published over fifteen volumes of poetry, most recently Iflife (2006) and Ten to One: Selected Poems (1999). His critical books are The Marginalization of Poetry: Language Writing and Literary History (1996) and The Trouble with Genius: Reading Pound, Joyce, Stein, and Zukofsky (1994). He has edited Writing/Talks (1985), a collection of talks by poets.

Julia Bloch is Assistant Professor at the Bard College MAT program in Delano, California, and an editor of the online poetics journal Jacket2. She grew up in northern California and Sydney, Australia, and received her PhD in English literature at the University of Pennsylvania. Her book Letters to Kelly Clarkson is forthcoming from Sidebrow Books; she has published poems recently in Aufgabe, P-Queue, and Peacock Online Review.