The Literary Life of Cairo: One Hundred Years in the Heart of the City edited by Samia Mehrez 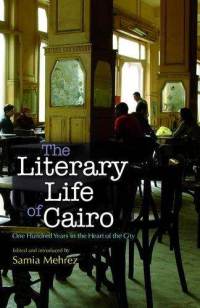 Samia Mehrez has chosen to portray the literary life of Cairo in the last one hundred years by selecting passages from what literary writers who lived in the city have written about it and its people. Unlike her Literary Atlas of Cairo (2010), which focuses on the literary geopolitics of the city, this companion volume offers representations of Cairo in the twentieth century by writers of novels, short stories, memoirs, and other narratives covering its socioeconomic and cultural life. Her selections bring alive a major Arab city known to its denizens as the "Mother of Cities," and demonstrate how space plays as important a role in narrative literature as character and plot.

The book has seven sections, each with an introduction. In each section, one main theme dominates the selected passages of a dozen or more writers. By turns, the reader gets to know the icons of the city, its cosmopolitan character, its educational system, its streets, its women, its underworld, and even its drug culture. The reader is invited to see how Cairo changes over time through the eyes of fictional characters and the imaginations of its literary residents. Whether it is King Farouk, President Nasser, or President Sadat in power, the reader shares the people's moments of political participation or oppression, students' experiences in postcolonial schooling, the audience's entertainment by a singer or a belly-dancer, different class attitudes toward current public events, and many other aspects of Cairo's life.

About one hundred works by Egyptian and other Arab writers served as the basis for the selected representations. Most are originally in Arabic, but some are originally in English or French. Men and women, Muslims, Christians, and Jews—all are enamored by the metropolis. Most are Egyptians like Naguib Mahfouz, Radwa Ashour, Salwa Bakr, Taha Hussein, Nawal El-Saadawi, and Tawfiq al-Hakim; but a few are outsiders such as Edward Said, a Palestinian, and Mohamed Berrada, a Moroccan, both of whom spent student days in Cairo.

This is a rare approach to the study of modern Arabic literature that resembles Franco Moretti's 1998 book, Atlas of the European Novel: 1800–1900. It confines itself to space in literature and does not deal, like Moretti's, with literature in space. However, it clearly opens new ways of understanding the interaction between society and literature and, as such, is a welcome addition to scholarship in Arab literary history.