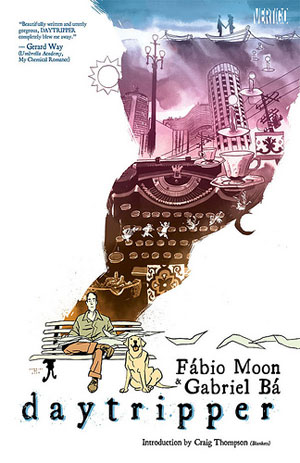 Daytripper is the rarest of graphic novels—a work meeting all the expectations of great literature that somehow emerged from the grinding gears of the American mainstream comics industry. Written and drawn by Brazilian twins Fábio Moon and Gabriel Bá (see WLT, March 2007), Daytripper is organized around the life of an aspiring writer named Brás de Olivia Domingos, whose father is a revered novelist. Originally serialized in ten separate comic books, Daytripper achieves the almost impossible task of playing equally to the individual unit and the finished work by making each story an alternative version of the last day of Domingos's life, marking that point at a variety of locations along his possible timeline. Adding to the layers of symbolism, Domingos languishes in his young adulthood in the shadow of his father's legacy, working as an obituary writer. Each section bears the structure of an obituary and serves as a sometimes sobering and often life-affirming meditation on the weight of individual decisions and the balancing effect of fate.

Moon and Bá's visual approach is more suggestive than representative but manages just the right amount of detail and thoughtful coloring, supplied by Dave Stewart, to masterfully draw the reader into the lush social and physical backdrop of Domingos's life and, more broadly, Brazil as a nation. With the attention paid to the single issue as a unit, each individual story is given room to breathe, with the powerful visual aspect of storytelling carrying the quiet sections that are interspersed between well-paced dialogue and captioning. This gives the big moment that defines each story the space to really produce an impact when it hits, and few, if any, of the endings arrive without implicitly reflecting back on the other possible endings for Domingos's story.

Most impressively, Daytripper, upon completion, cannot simply by reduced to being "about" this thing or that thing. In its careful examinations of births and deaths, the big and little moments that happen in between, and the interplay between possibilities, Daytripper reaches that elusive goal of being about life without disappearing down its own navel in the process. It is a marvelous feat that demands not just reading but study in its wake.