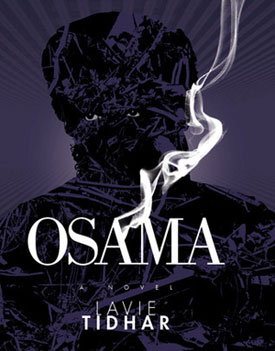 Joe is a detective. One day, as he sits in his spare, somewhat dilapidated office in Vientiane, Laos, reading a pulp thriller, a mysterious yet strangely familiar woman appears. She offers Joe a job: find the missing author of the book Joe has been reading, a man who publishes under the unlikely moniker Mike Longshott. ("No one could really be called Mike Longshott.") Joe accepts. The book, Assignment: Africa, the shoddy production of sleazy Paris publisher Medusa Press, is "the third title in the series Osama Bin-Laden: Vigilante."

Joe's world closely resembles yours and mine, but, we quickly realize, it differs in small ways. Everybody smokes. Charles de Gaulle died in Algiers in 1944; poet Antoine de Saint-Exupéry became president of France. No one knows what a cell phone is, who James Bond is, what Area 51 is. It differs in big ways too. Terrorism is the stuff of "good escapist fun," one character explains: "To read about these horrible things and know that they never happened, and when you're finished you can put down the book and take a deep breath and get on with your life. To know it's fiction—"
In Joe's world, is the world of Longshott's novels—extracts of which reveal to be our world—fiction? Or are both somehow real? If so, might people from one cross into the other? As he doggedly pursues clues, finding it increasingly hard "not to confuse reality with fiction," Joe must face these and other, more disturbing questions he desperately wants to avoid.

Osama is both a thriller and a beautifully crafted, serious novel. Tidhar has a gift for lyrical, sensory description laced with pitch-perfect similes and metaphors. Here his style is overtly cinematic: jump cuts, freeze-frames, and allusions to film noir, especially Casablanca (1942), all highlight questions about the nature of perceived reality. Using the distancing effects of genre—alternate-history science fiction and Chandleresque detective fiction—Tidar forces us to see our world anew, to question notions we might otherwise take, on faith or through inattention, as true. His focus is terrorism, the war on terror, and what both have done and are doing to us.

Reading Osama along with the novellas Gorel and the Pot-Bellied God and Cloud Permutations, one appreciates the range of Tidhar's talent. (He also maintains "The World SF Blog" and edited The Apex Book of World SF (2009), an exceptional collection of fantastic tales from twelve countries—see WLT, May 2010, 39–41.)

Gorel is a bit of a lark: a classic quest story and an adroit riff on "The Frog Prince," which Tidhar wittily refracts through the literarily disreputable "sword-and-sorcery" subgenre of fantasy. (Its subtitle is A Guns & Sorcery Novella.) Gorel of Goliris—loner, drug addict, and gunslinger—sets out to find a mirror he thinks will show him the way home. Along the way, he accumulates a coterie of companions, not all of them human. Rousing adventures ensue.

Cloud Permutations, too, tells of a quest. At age three, Kal encountered "[a] man the colour of the sky." From this encounter was born Kal's "one ambition . . . he wanted to fly." Ever since, he has suffered dreams of falling from an immense black tower.

Kal lives on Heven, a "world of the sea, a world of islands. A world . . . [o]f clouds." A world where flying is forbidden. Centuries earlier, descendants of the Melanesian island nation of Vanuatu traveled "through space for aeons" and settled Heven. Cloud Permutations tells of the quest of Kal and an albino thief named Bani, the two bound by friendship and prophecy, for the tower—a journey beyond the known islands of the planet-spanning sea, a journey filled with adventure and danger, revelation and tragedy.

But Cloud Permutations is no mere bildungsroman. Its text, which reads like an homage to Jack Vance and explicitly evokes Cordwainer Smith and Samuel Taylor Coleridge's Kubla Khan (1797), was written by an unidentified historian generations after Kal's quest, which has assumed great cultural importance on Heven. Reconstructed from fragmentary, often contradictory accounts, the text is fraught with ambiguities, competing narratives, and unanswered questions. Tidhar thus elevates Cloud Permutations into a meditation on the making and meaning of cultural myths.

Along with The Tel Aviv Dossier (2009, with Nir Yaniv), the steampunk romps The Bookman (2010) and Camera Obscura (2011), the linked stories in HebrewPunk (2007), and his many other shorter works—a collection of which someone should publish now—the books under review show Tidhar's rapid maturation as a writer. Able to mold a remarkable range of story forms to suit his aims, he is equally adept at pacing adventure sequences and at crafting vivid poetic passages that vivify scene and character.

All three of these beautifully produced books are worth your attention. But Osama is exceptional. Compelling, confrontational, and surprisingly moving, it is one of the best novels yet on terror in our times.

(Editorial note: eBooks of all three titles are available from PS Publishing, and there is a Kindle edition of Osama.)