House of Stone by Anthony Shadid 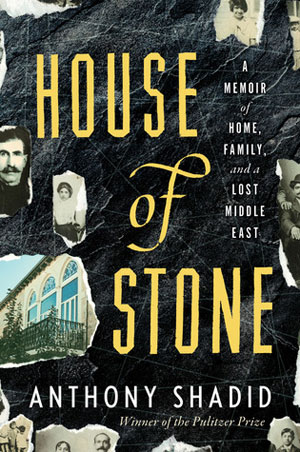 Some might consider building a home in a country as politically volatile and prone to violence as Lebanon an exercise in futility, especially somebody who’s witnessed as much destruction, conflict, and carnage as Pulitzer Prize–winning foreign affairs reporter Anthony Shadid. But despite all the violence he’s observed and even fallen prey to in the Middle East (Shadid was shot in the shoulder by a sniper while covering the West Bank in 2002 and kidnapped, beaten, and held hostage for four days in Libya last spring), the New York Times’ Beirut bureau chief shares an enlightening and occasionally poignant memoir of loss, redemption, and hope in House of Stone, his own tale of creation and genealogical reconciliation.

Two long stories, made short: First, Shadid took a year of absence from his position reporting in the Middle East to rebuild his family’s ancestral home in Marjayoun, Lebanon. Second, after amassing hours of interviews with family members, old diaries, and other firsthand documents, he tells the story of his great-grandfather Isber Samara, who sent his children off to America to avoid the violence that marked the breakdown of the Ottoman Empire after World War I. The two alternate as separate narratives, combining to tell a longer, more comprehensive story than the thousand-word dispatches to which Shadid is accustomed. Sympathetic Lebanese and American characters emerge, their hope or lack of hope for a peaceful existence spelled out across a setting evoked in the small details noticeable only to a world-class reporter’s eye.

While similar-sounding to a Tom Wolfe–style sample of immersion journalism, House of Stone falls squarely in the realm of the memoir, with its author obsessing over details from the past that ultimately spin full-circle: “I often wondered whether Isber, whose life was altered so unexpectedly by the events of his era, felt as dispirited as I did about the fate of his homeland,” Shadid writes. “How deeply had he felt the loss that led me to his house?”

That question of loss ultimately proves the source of Shadid’s fear—and his motivation to prevent it by rebuilding the home. In a realm of destruction, it’s a monument to creation. (Editorial note: To read Carney’s interview with Shadid, see page 50 in the print edition.)