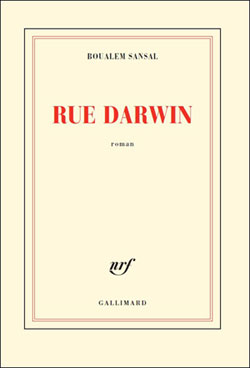 Rue Darwin is Boualem Sansal’s fourth novel. His third, Le Village de l’Allemand (2008; Eng. The German Mujahid, 2009), related the discovery by a young Algerian in France that his father was a Nazi who escaped to North Africa after the war and became a Muslim. Rue Darwin relates another story of the discovery of an unsuspected past by the narrator, Yazid, whose life is close to that of Sansal himself.

As a small child, Yazid is told he is the grandson of Djeda, the wealthy owner of a number of brothels in North Africa and France. After Karima, whom he considers his mother, disappears when he is eight, he is abducted from the brothel by Farroudja, a poor woman who worked for Djeda. She brings him to the Rue Darwin in Belcourt, a poor section of Algiers. Always aware of his own uncertain origins, he sympathizes with others who are rejected for the conditions of their birth. They have been oppressed by the rule of an intolerant Islam: “Liberty, so dear to people in the past, has become an unpardonable sin. Islam reigns as a jealous master.”

Yazid is particularly conscious of the situation of Jews. He remembers his own childhood friendship with a rabbi in Belcourt when different religions could live peacefully together. In 1973 Yazid is mobilized in the fight against Israel; he listens to the propaganda about the weakness of the Jewish state. When the Arabs are defeated, the troops are told “Arab lands need blood and the Muslims need martyrs.”

Yazid began his story with a trip to Paris with the dying Karima, where he looks for Daoud, to whom he was close when they lived together as children in the brothel. He learns that Daoud worked in the Hotel Lutetia where a Jewish friend’s family worked. (Hotel Lutetia was where the Nazis organized the deportation of Jews, but also where the Jews who were not killed were brought back to France after the war.) He took the name of David. Being homosexual was, he felt, more of a dishonor to a Muslim than to a Jew.

It is only at the end of the novel that we learn the depth of Yazid’s relationship to Daoud. Rue Darwin tells of the problems of identity in an Algeria where Islam is no longer a religion of peace, and where relationships within Algerian society, and with the French, are far from being resolved.

Editorial note: For more on Sansal, read the WLT web exclusive interview “A Rustle in History: Conversations with Boualem Sansal" online with select content from the September 2012 issue.