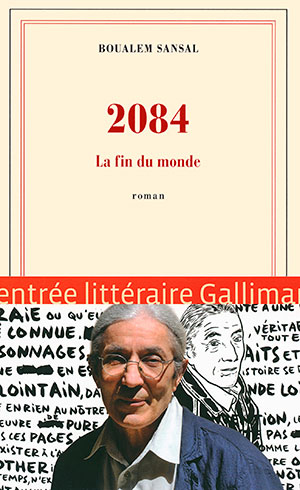 Boualem Sansal often writes about the power of religion in north Africa (see WLT, Sept. 2012, 16–19). In 2084, his seventh novel, which won the Grand Prix du Roman from the Académie Française, the political domination found in Orwell’s novel is replaced by a religious domination. Sansal invents a religion, which will be put in place in the future, in which everyone is in submission to a god who has imposed a system of certitudes. No one can question the truths that Abi, the ruler who represents the god Yölah, has decreed. Screens repeat the ruler’s words and his picture; waves enter men’s brains and keep them from thinking.

Ati, who has suffered from tuberculosis and spent two years in a sanatorium, meets an archaeologist, Nas, who has found evidence of a village in which men escape the power of Yölah. Nas has discovered “that religion can be based on lies, not on truth.” Ati realizes that he too cannot accept Abi’s truths. After returning to his native city, he meets another man, Koa, who is similarly disturbed. The two men visit the ghetto of Qodsabad, where they find women who live freely, without bandages over their breasts, and without covering their faces.

Ati and Koa decide to find Nas and then visit a village beyond the power of religion. Although Koa is told he is to be a judge in the trial of a woman who will be tortured and killed, he is unable to accept this role, and the pair manage to arrive in Abigouv, the luxurious realm of the rulers. There they learn that Nas has committed suicide under obscure circumstances. The clans who are fighting for power cannot accept Nas’s belief in the existence of a region before Abistan was created. Ati and Koa meet Toz, who has built a life for himself beyond the power of the clans and even constructed a museum of the twentieth century, before the mythical date of 2084. Although Koa is killed, Ati plans to find the frontier, a region that Nas had found. Ati realizes that Abistan is built on a lie, upon which the rulers have invented history and geography.

While these adventures are told in some detail, much of the novel is based on explanations of the force of the religion and its power over the inhabitants with little description of characters or events. Ati is not a hero with whom a reader could sympathize. Sansal bases the religion of Abistan on a parody of Muslim doctrine. The language is abilang, an invention of the rulers. There are nine prayers each day, frequent torture of misbelievers, and the refusal to consider that any events took place before Abi’s rule.