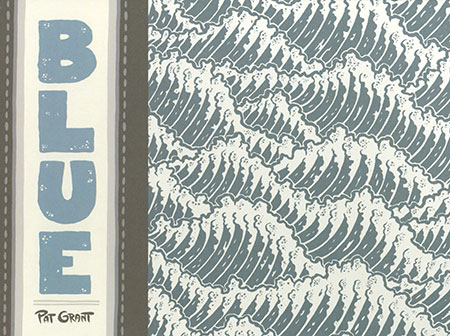 The Australian comics scene has historically been a parenthetical description added to anglophone comics published in the United States and the United Kingdom, much like Olivia Newton-John or Air Supply happen to be Australian. Australia’s best-known cartoonist, Eddie Campbell, is a Scottish expat whose most famous works are about London. While the continent down under has enjoyed a slow percolation of activity over the last decade, few graphic novels produced by Australians have made a meaningful impression on the medium as a whole, let alone begun to carve out some recognizable niche in the narrative continuum that would allow them to be grouped by any identifier other than geographic.

Pat Grant’s Blue may not be the book that changes that reality, but it is a step in the right direction. It is an odd graphic novel, composed of juxtaposing elements that don’t always fit together seamlessly. Blue does carry a fiery ingot of sufficiently localized experiences and interests at its core that impart a real sense of place and identity to the reader upon its completion.

Grant is a fascinating artist and applies a diverse array of visual storytelling devices to craft this disarmingly simple story of early adolescence. The veneer of science fiction he adds to deal visually with issues of racism and xenophobia folds extra layers of graphic interest into the book to draw the reader in. His sensitive treatment of the landscape, particularly the ocean as it relates to surfing as a subplot of the story, gives Blue a degree of complexity that encourages the eye to linger on the page and consider the forms from a design rather than a strictly functional position. All told, it is a beautiful book to look at, and, while that doesn’t always equal good comics, it’s never a bad place from which to start.

The narrative never seems to mesh as effortlessly, however, as the visuals driving it. Though the dominant plot thread, the story of three teens walking a railroad line to view the remains of a mangled body, is delivered with some precision, the subplots meander alongside rather than contribute to the final punch of the conclusion. The narrator’s static persona undermines the impact of the event under consideration and, ultimately, leaves Blue feeling like more of an excursion than an exegesis. At ninety-six pages, its promise may exceed its reach, but the result is provocative enough to keep an eye on Grant as a creator with the potential for greatness.

Rob Vollmar
University of Science and Arts of Oklahoma