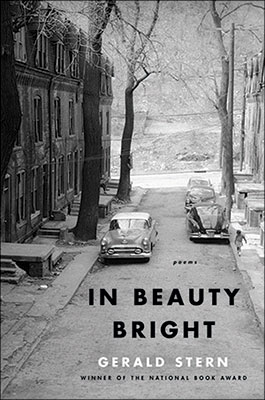 In “Four Crises,” an essay in his 2012 collection Stealing History, Gerald Stern writes: “Humans, because of their minds, because of their social organization and their knowledge of their own futures (and their thumbs and voice boxes), have one crisis after another. . . . One of the famous ones is the crisis of forty, the crise de quarante, and I remember going through it right on schedule—or maybe a year late—and associated, for me, with deep depression (I thought) over how my life as a poet was going; followed, or accompanied, by a new language, or mode; or submission, or awareness, that stood me in good stead for another four decades and more” (see review on page 77 of this issue). In 1965, at the age of forty, Stern’s crisis of self-doubt called into question his very existence as a poet. Yet it would be another dozen years, culminated by the 1977 publication of Lucky Life, until he would gain the sort of recognition—an NEA grant, a Guggenheim fellowship, and the Lamont Poetry Selection from the Academy of American Poets—that would eventually assure him a place in Rita Dove’s Penguin Anthology of Twentieth-Century American Poetry (2011) as well as multiple national poetry awards, including, most recently, the 2012 Rebekah Johnson Bobbitt National Prize for Poetry from the Library of Congress. It’s one of the remarkable poetic ascendancies of the late twentieth century.

Now in his eighties, Gerald Stern dedicates his latest collection of poems, In Beauty Bright, to his friends in Pittsburgh, where he grew up “during the dark times” in the years prior to World War II. Having survived the earlier crisis moments in his life—times of “intense pain, regret, anger, and deep isolation”—the “brightness” of this new collection is all the more radiant against the chiaroscuro of those early years. The black-and-white photo by Teenie Harris on the dust jacket evokes Pittsburgh’s “dark times,” but many of the poems here emit sweetness and light.

Divided into a triptych, the book resists easy summary. The high points of part 1 can be found in the poems “Casals,” “Eleanor,” and “26 Vandam,” the latter poem glossed in an essay by the same name in Stealing History in which the author writes about his “personal Yaddo,” a beloved fifth-floor apartment on Vandam Street in West SoHo: “It was the happiness of being in New York, and it was the excitement, and awe, of being at the center.”

Part 2 includes homages to Pittsburgh in “Books” (the Carnegie Library), “Slow to Learn,” and “Too Late,” in which the speaker remembers nights when he might “half fall off my / stool, and grab her and whirl for fifteen / straight, or just to feel her breasts / against me and to loosen my tie, my short and flowered tie.”

Part 3, while the shortest section of the book, contains some of its most important poems: “Nietzsche,” “Bio III,” and “Lowness.” In “Bio III,” the speaker attempts to gather up crumbs along the trail of his life, despite being continually “dispersed” and “waylaid”: “what I loved,” he writes, “always got in the way.” And in “Lowness,” the poet reiterates his claim against all forms of mystification, preferring a poetry of lowness that dips down into the jetsam of life and excavates meaning from what he finds there.

Read this collection full of bright beauties, made all the more radiant by the dark shadows around them, and you’ll encounter the work of an American master.