The Fifth Impossibility: Essays on Exile and Language by Norman Manea 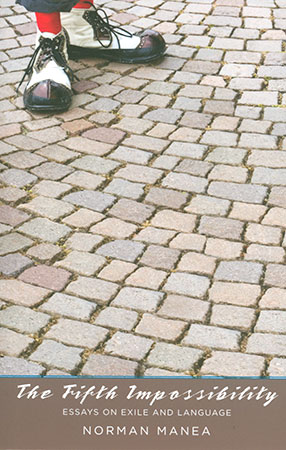 The Fifth Impossibility is a collection of essays by Norman Manea previously published in major United States journals and abroad in the aftermath of the Soviet bloc’s collapse, to help us, he explains, understand the past for the sake of the future. Written in Romanian, Italian, German, and English, it is translated by a group of distinguished literary translators, writers, and scholars. The fact that some of the essays have been reprinted from an earlier anthology published less than ten years ago indicates the author’s and publisher’s sense of the continued relevance of this commentary.

Written for non-Romanian audiences, the essays address nationalism and Nazism in Romania, the reverberations of the communist disaster in Europe, and the journey of a number of prominent Romanian-born intellectuals through these layers of violent history. In a few succinct essays, Manea offers an explanation for what Timothy Snyder’s Bloodlands: Europe Between Hitler and Stalin (2010) left as an open question—how such horrors came to be afflicted on neighbors by neighbors and, regarding another historical period, why in the postcommunist decade it is “preposterous to expect democratic manners from those who are deprived of their daily bread.” The essays also present Manea’s perspective on American capitalism, democracy, and academia as well as on its writers and cities.

The volume’s subtitle, “Essays on Exile and Language,” might remind the reader of similar essays written by bilingual writers, such as Lives in Translation: Bilingual Writers on Identity and Creativity (2003). However, the author’s engagement with the subject of language is not as intimately autobiographical as one might expect. His relentless devotion to right and wrong, his honest scrutiny of both history and the human condition under the pressure of history, and his dedication to the standards of objectivity and fairness do not allow him to be subjective, personal, intimate. As an essayist, Manea is a witness who does not have these luxuries. One has to pace oneself while reading these texts—musing over the intellectually dense prose and relentless, though always restrained, judgments; savoring the language that in so many ways explains what it means to be a writer, a Jewish writer, a Romanian writer, a writer in Eastern Europe, and a writer abroad.

If this volume is intimate, it is inconspicuously so. The author is infinitely fascinated by death, its natural and unnatural causes, and by the spirituality of self-destructive impulses and the slow, discontented decay of human body and mind. In the last, previously unpublished essay on Kafka, Manea claims his own historical, spiritual, and creative heritage. The essay is as sad and beautiful as a swan’s song. It draws the reader from the study of history to the consideration of man—as writer, as permanent exile in his own skin and his own language, as loner who nevertheless reaches out from exotic, unknown Prague or Bucharest and pleads with us to be a little more human.