Friends of Mine by Ángela Pradelli 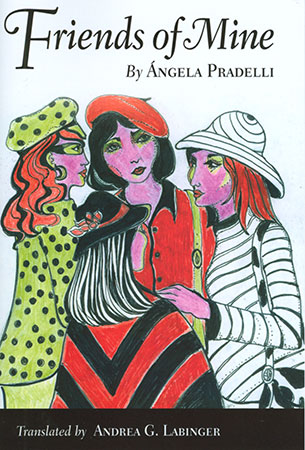 Friends of Mine contains a series of seemingly unrelated events in the lives of four childhood friends: Olga, Ema, Patricia, and the ubiquitous Me. The book is divided into one preliminary section entitled “Friends,” describing the years of childhood pranks, the angst of teenage years, and sets the scene for the following sections: “Olga,” “Ema,” “Patricia,” “Me,” and “Ema: Her Death,” which relate the individual lives of each woman. Yet in spite of their long connection to each other, the four friends have met only once per year for twenty years each December 30 to touch base and reconnect via their adventures and misfortunes. Throughout the rest of the year, however, except in the case of Ema and Patricia—who meet more frequently—the friends live their lives separately and have little contact with one another.

The fragmented narrative creates confusion for the reader, who is taken from episode to episode and from person to person with little sense of communal integration or interrelation. At the same time, the parents, spouses, lovers, offspring, and extended family members of the four women enter and leave scenes that appear to have no correlation to the central schematic of the friendship between the four. The narrative voice switches constantly from first-person “I” to third-persons “he,” “she,” “they,” and “we,” without naming the subjects, which makes it difficult to identify individual characters.

Yet in spite of the fragmented events and the lack of connection or apparent continuity between the four friends, the enduring essence of their long friendship is admirable, and the reader is sensitive to the underlying trauma that all four friends suffer to varying degrees throughout their lives. Ángela Pradelli manages to connect peripheral characters with little direct relation to the quartet and link them indirectly to one or more of the four principal characters. This unity allows the reader to join the dots between disparate events and people sometimes three or four people removed from the four friends and make sense of the seemingly senseless narrative fragments.

There are numerous poignant episodes in Friends of Mine reflecting the ups and downs of modern-day women striving to survive in mundane, unfulfilled circumstances. The complex paths that each of the women follows in her quest to survive and conquer emotional, economical, and psychological difficulties allows the reader to identify with them as they move inexorably through youth into middle age and beyond. Friends of Mine is a provocative read that is intriguing in its simplistic description of the depth of emotions and feelings of four “ordinary” women in modern-day Argentina.