The Future Is Not Ours: New Latin American Fiction 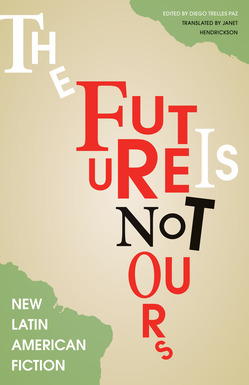 The Future Is Not Ours compiles twenty-three stories from fifteen Latin American countries, including Brazil. The anthology only includes authors born in or after 1970 and therefore provides readers with a definitively contemporary array of writers. Starting from a sensible rejection of clichés, Diego Trelles Paz affirms that the future indeed does not belong to the young, a fact that bears itself out in many of the stories’ meditations on rupture and uncertainty. For example, one of the best stories in the collection, “Fifteen Flowers,” by Federico Falco (b. 1977, Argentina), portrays the struggle for continuity in a rural community traumatized by a pregnant girl’s unexpected suicide. Written in a distinctive, coherent style that deftly combines the adult narrator’s comprehension of how he perceived life as an adolescent, Falco’s story is a poignant exploration of first loves, complicated friendships, and the outmoded community traditions that not only fail to help but actually hinder how young people understand their world. “Shipwrecked on Naxos,” by Ariadna Vázquez (b. 1977, Dominican Republic), intercalates letters with first-person narrative in a story about living in Mexico City that also contemplates rupture and continuity, this time in the figure of a young woman who struggles to piece together the disparate elements of her existence, which range from her job as a drug dealer to the demand by her eccentric landlord that she tell him stories once a week simply because her name is Ariadne.

On the whole, the anthology succeeds in developing a nuanced representation of contemporary Latin American life as seen through its short-story writers, who focus on a broad range of topics but who do not, as Trelles Paz puts it, aim to explain “an era in its totality” or to “faithfully [span Latin America’s] tragicomic history.” Additional examples that strengthen the anthology include “Any Old Story,” by Ricardo Flores (b. 1973, Guatemala), about the brutal trials and tribulations suffered in Guatemala City by a young woman from the provinces; “Boxer,” by Carlos Wynter Melo (b. 1971, Panama), which concisely characterizes the long-term effects of condensed rage; and “Lima, Peru, July 28, 1979,” by Daniel Alarcón (b. 1977, Peru), a story that humanizes but does not justify an important initial act of violence carried out by the Shining Path.

The strength of The Future Is Not Ours rests primarily on the merits of its most accomplished stories. Nevertheless, it would be a better-defined collection if, first, its thematic relevance was explained as something other than the eroticism and violence that Trelles Paz’s prologue unconvincingly characterizes as “core motives and concerns of the Latin American literary tradition”; and, second, if its organization was not simply alphabetical by country and author, an arbitrary order that does little to remedy the anthology’s general lack of coherence.