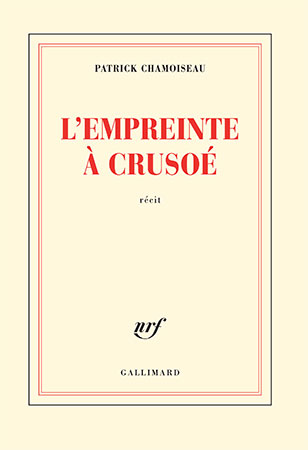 Rewritings of Defoe’s Robinson Crusoe have been numerous, especially among Caribbean writers. Robinson Crusoe presumably landed on the island of Tobago, and the slave trade and domination of one race by another are prominent themes.

Patrick Chamoiseau’s previous work often centered on the political. With L’empreinte à Crusoé (Crusoe’s footprint), he focuses on the imaginary. The story is told as a continuous monologue with no periods but with semicolons, which he considers a means of keeping the story flowing. There is no clear plot. The person stranded on a deserted island is at first puzzled, looks for a ship to rescue him, but soon feels himself the “only master, after God and the seigneur, of the island.” He invents rituals to live by, writes in a small book he found on the wreckage of the ship, plants crops, and tends animals. Then he discovers a footprint in the sand, which obsesses him. There is an Other; because of the presence of the other, he begins to look at the world with poetic, not practical aims. He joins the turtles in a great ecstatic dance. He builds an artistic wall around the footprint and sees the island as a living organism. He invents another himself, Sunday, who forces him to rethink his identity: “Perhaps the idiot that I had become after all these years was transformed into a small person.” He also reads fragments he found in the ship, passages by Parmenides and Heraclitus, who knew that there was an unknowable grandeur.

Beautifully and poetically written, the thoughts of the deserted man are reinterpreted in the final chapter of the novel. He was not a slave trader or a European sailor. He was an educated Muslim Dogon from Mali who worked with Robinson Crusoe, the captain of a slave ship. Crusoe had left him on an island after an accident in which he became delusional.

A section labeled “L’Atelier,” Chamoiseau’s notes for the composition of his work, completes the novel. He realizes he cannot reproduce the innocent narration of Defoe’s story, which fascinated him as a child. He cites other influences on his imagination, including Michel Tournier’s Vendredi ou les limbes du Pacifique (1967) as well as Derek Walcott, Édouard Glissant, and even Pascal. For him the story must be “interior and mental,” must move in spirals, and must reflect the problems of individuality in the contemporary world. Patrick Chamoiseau’s poetic person is far from the world of Defoe.