Samle fersen by D. A. Tamminga 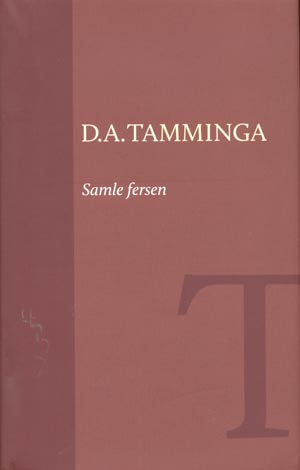 Douwe Annes Tamminga (1909–2002) was the most significant Frisian poet of his generation. His legacy lives on in Samle fersen (Collected verse), a hefty volume of 743 pages featuring the work of his twelve volumes published between 1938 and 1984 (and more). The editors wisely, and necessarily, decided not to try to include all of Tamminga’s voluminous output. Hence they placed another 471 pages of verse in PDF form on CD, which is also included with this volume.

Tamminga’s versatility is astonishing. He was a poet first of all, but he was also a novelist, playwright, journalist, critic, reviewer, and translator. This volume amply reveals the range of his poetic creativity: from occasional verse to epic, from ballad to lyric, from secular and sacred songs to sonnets, from satire to psalms. In every form, the poet displays his mastery of language, ingenuity, creativity, and craft. His translation of Poe’s “The Raven” is a technical triumph, equal to the original in its mesmerizing impact. Also impressive are his translations of Dylan Thomas’s “Winter’s Tale,” of Wilfred Owen’s “Dulce et Decorum Est,” of the Dutch poet Jacobus Revius in seventeenth-century Frisian, and of many others from other languages, including Heine, Baudelaire, Yeats, and Betjeman.

But Tamminga saw himself first of all as a poet in service to his own people and culture; as he put it in one of his poems: “Make me of service. . . to say your endings in a song that never dies.” Accordingly, the reader will find many selections that honor fellow Frisian poets, familiar folktales, historical events, village and rural life; notable too among all these are his many contributions to the Frisian Hymnal for the Churches. More surprising, perhaps, are names such as Martin Luther King Jr., Shakespeare, Tristan and Isolde, and Don Quixote that pop up throughout the volume. Clearly, Tamminga’s interests and literary knowledge were not confined to his own province.

The poet has sometimes been criticized for a poetry that is too cerebral, too self-consciously crafted, too restrained. But all agree that there’s a sweet lyricism in his love songs, and a depth of feeling and emotion in his “In Memoriam,” written after his only son’s premature death at age nineteen. Indeed, having won all of Friesland’s most prestigious literary awards, Tamminga will long be remembered as a poet of distinction, inside as well as outside of the Netherlands. As such, he continued what Gysbert Japix began three centuries earlier: through poetry, the rendering of Frisian into a fulsome cultural language.

The editors did a superb job of making this volume reader-friendly. They included in the front of the book a general table of contents with the titles of the volumes collected; in the back the reader can find a complete summary of the contents in which all titles are cited, an alphabetical list of all selections, as well as an alphabetical index to the first line of every selection. Additionally, there’s also an index to the material included on the CD. And last but not least, there’s a helpful biographical and critical overview of the life and work of the poet. All of which makes this volume a worthy addition to any institutional or personal library of Frisian literature.