A Thousand Mornings by Mary Oliver 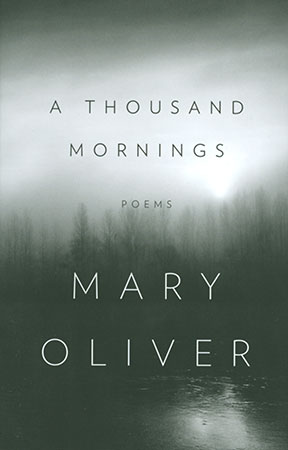 If all the poems in A Thousand Mornings were as remarkable and well made as “Hum, Hum,” which mines childhood pain in a powerful way, it would be a worthwhile book indeed. “Hum, Hum” succeeds by offering more ambiguity than the typical Oliver poem. Rather than the simple praise of mystery that typifies her work, this poem enacts mystery, from the surprise arrival of bees in the beginning, through a dark past, to a pressing onward at the end. As such, I recommend the 2011 issue of Georgia State University’s literary journal, Five Points, in which “Hum, Hum” first appeared (14:2).

The majority of the poems in A Thousand Mornings, though certainly accessible, repeatedly come to rest in self-congratulations. “If I were a Sufi for sure I would be / one of the spinning kind” Oliver proclaims with a pat on her own back at the end of “If I Were.” In “Good-Bye Fox,” she ventriloquizes nature for the purpose of self-affirmation: “you’re okay in my book,” says the fox in response to the poet’s wit. In “The Moth, the Mountains, the Rivers,” Oliver preaches outright: “Strange questions, yet I have spent worthwhile time with them. And I suggest them to you also, that your spirit grow in curiosity, that your life be richer than it is, that you bow to the earth as you feel how it actually is.” A similar poem is “Three Things to Remember,” which begins with “As long as you’re dancing, you can / break the rules” and then immediately concludes with “Sometimes breaking the rules is just / extending the rules. // Sometimes there are no rules.” One fears this may be what Facebook and Twitter can do to contemporary poetry.

“You fuss over life with your clever / words, mulling and chewing on its meaning,” that talking fox affectionately chides Oliver, but the charge does not hold up. This metaphor of chewing on meaning is itself among the most worn-out of clichés. In “The First Time Percy Came Back,” we are told that the dead dog is “unreachable. As music / is present yet you can’t touch it.” Such easy sentimentality is a betrayal of the poem’s emotional stakes (compare the two elegies for Oliver’s Percy to Mark Doty’s devastating pet elegies in School of the Arts). A few flashes here and there suggest that Oliver is still capable of arresting images well expressed but, in most cases, has not sufficiently bothered to search for the stronger, fresher line. She has, to borrow from Yeats, failed to “lie down where all the ladders start.”