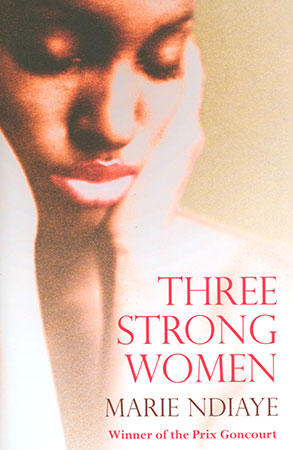 With Three Strong Women, Marie NDiaye became the first black woman to win the Prix Goncourt. This intricately structured, subtle, and lyrical novel constitutes a tapestry of delicate threads connecting France and Senegal. Yet while implicitly addressing issues common to postcolonial and diasporic works, it foregrounds instead the inner suffering of its protagonists, capturing their deeply bruised humanity.

The novel’s three sections unspool nonlinearly, within the protagonists’ minds, and are intricately linked. The father of Norah, “strong woman #1,” bought a resort in Senegal after the father of Rudy Descas, husband of Fanta, “strong woman #2,” was imprisoned for murdering his partner. Fanta’s cousin is Khady Demba, “strong woman #3.” Present in section 1 as the servant of Norah’s father, she tries in section 3 to reach Fanta in France. These fragile ties unite the disparate tales.

Norah, Fanta, and Khady exhibit their strength (or power, as the original French title, Trois femmes puissantes, suggests) by surviving difficult personal and social situations with their spirits intact. Norah’s Senegalese father abandoned her when she was eight, took her beloved younger brother back to Senegal, and left her French mother impoverished and despondent. Yet Norah manages to become a lawyer on her own and travels to Senegal to help her father. Also from humble roots, Fanta became a teacher of French literature at a private school in Dakar. But her initially loving marriage to the French Rudy costs her both country and career. Rudy, meanwhile, the second section’s protagonist, witnessed his father’s murderous act, lived with his father’s prison suicide, and attacked a student who taunted him with that past. This left him bitter and paranoid and forced him back to France, where he abuses Fanta psychologically. Finally, Khady was abandoned by her parents, raised by her grandmother, and compelled to live with her dead husband’s abusive family, who sent her on an arduous journey to find Fanta in France. Yet despite her traumas, Khady views herself as “unique and indispensable.”

Each laserlike section penetrates deep into the psyche of its protagonist, capturing how the mind deals with painful memories, assigns guilt, and handles self-doubt. In each, a nature image proves symbolic: Norah’s father hides in a flame tree whose rotting flowers evoke his own decay; Rudy repeatedly encounters a huge black buzzard that seems to foreshadow his fate until he kills it after reaching an epiphany. During Khady’s long, doomed trek to reach France, she fears crows and those with “crow’s eyes” who “caw,” believing them dark omens.

Finally, Three Strong Women offers hope tempered by realism. This quietly haunting novel bares the tortured souls of its major characters but simultaneously demonstrates how gender, race, and class limit women, whose survival depends on their strength. Norah and Rudy conquer their demons, which eases Fanta’s torment. But realpolitik—soldiers’ firing on would-be émigrés—fells the indomitable Khady, who kept her spirit even when prostituted and abandoned by the boy who promised to save her. In this world, sometimes strength is not enough.