When the Night by Cristina Comencini 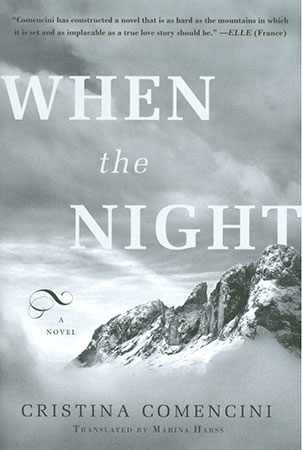 Writer and filmmaker Cristina Comencini’s 2009 novel Quando la notte was a hit in Italy, as was her film based on the book, released two years later. Now, Marina Harss’s English translation of the popular work is available under the title When the Night. Set in northern Italy’s Dolomite Mountains, it tells the story of Marina, on vacation with her young son, and Manfred, the mountain guide who rents them an apartment. The novel is consumed by the growing tension between Marina and Manfred, while their individual characters are gently rounded out page by page through memories of adolescence, family life, and past loves. The majority of the work spans a few short weeks, enough time for the equally troubled Marina and Manfred to piece together clear impressions of one another, and for what starts as anger and suspicion to find its way to love. Abandoned by his own mother as a young child, Manfred doubts Marina’s maternal capabilities, especially after a curious accident with her son one night. She, in turn, reads his brusque ways as the outward manifestation of a deeply wounded child, denied the sort of tenderness she at times struggles to provide to her son. Contemplating Manfred’s childhood from the mountain lodge in which he was raised, now run by his brother’s family, Marina concludes: “If he had been my child, I wouldn’t have left him.”

In many ways, When the Night is a modest tale, with few moments of action or even communication between the two protagonists. At the same time, it tackles fundamental issues: the struggles inherent in family relationships, the scars left on us as children and those that we may pass on as parents, and the murky waters of desire. In particular, the work explores the complicated emotions of motherhood, as shaped by social expectations and personal fears.

The book is a page-turner, easily read in a sitting or two. Its syntax is simple, but this reads as a stylistic decision rather than the result of translation. Such simplicity is particularly beneficial for the work’s first-person narration, which is seamlessly split between Marina and Manfred’s points of view with no formal notation to mark the shift. Comencini is best known in Italy as a film director, and her books do have a certain screenplay quality. This does not lessen the experience for a reader, however, but rather leaves her eager for the next scene. Comencini knows how to tell a gripping story, slowly churning the primary tension with measured restraint as she continues to add secondary narrative elements. When the Night is an engaging read, best for those looking for something with the hint of a psychological thriller or, perhaps, seeking to imagine the crisp air of Italy’s Dolomites.