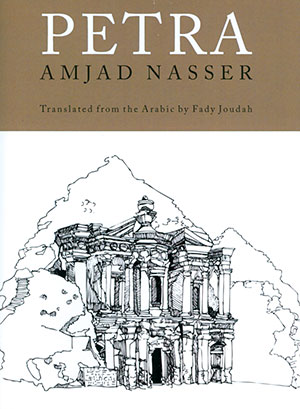 Petra is a beautiful hand-sewn chapbook whose text is set in handsome Garamond typeface printed on archival-quality paper and published as a small paperback of thirty-two pages. It offers a poetic translation of Amjad Nasser’s Arabic prose lyric on Petra, the Nabataean city about which the English Anglican clergyman John William Burgon (1813–1888) wrote a prizewinning poem in 1845, in which he famously said it was “a red-rose city half as old as time.” More recently, in February 2015 a PBS special on Nova entitled “Petra, Lost City of Stone,” showed the ever-fascinating historic remains of this enchanting caravan city of Hellenic-Roman times in present-day Jordan, its gracious temples elegantly carved in the cliffs, its inhabitants’ abodes hewn in the rock, and their tombs.

Nasser, born in Jordan in 1955, is a London-based poet with nine collections of poetry, four lyric travel memoirs, and one novel. His works have been translated from Arabic into several languages. In addition, he has been a journalist throughout his career. In his prose lyric on Petra, delicately translated by award-winning Palestinian American poet Fady Joudah, he evokes the city’s beauty and history in his unique style of travel memoir. Unknown to the modern Western world until 1812, when rediscovered by Swiss explorer Johann Ludwig Burckhardt, Petra can now be rediscovered by readers of this prose lyric and enjoyed in verbal delights.

Nasser begins Petra: The Concealed Rose with the stupefaction of visitors on first seeing Petra’s beauty: “We know you’re hiding there / behind that rib cage of a guard. / Breathing with the mountain’s lungs and watching, / through the rock’s sunken secret, / comers and goers who are seduced by descriptive talk, / before silence stamps its lilac seal on their lips.”

And he proceeds to a detailed description of what the Bedouins knew and appreciated before Burckhardt ever learned of the “concealed wonder,” disbelieving their talk about it like typical Orientalists who disparage local informants. Nasser later acknowledges Burckhardt’s courage and curiosity and thanks him not because he “discovered” Petra’s beauty but because it shook him and made him talk about it as though hallucinating.

The prose lyric then leads the reader through the city’s splendid remains to marvel at al-Khazneh and the other radiant carved monuments and to learn about the Nabataean deities and myths. A dreamlike world of what is seen evokes Sufi experiences of beauty, love, and unity where “Nothing overpowers another. Here balance is just.” True to its principles, Tavern Books has offered in this translation an innovative writer and a new vision and voice.