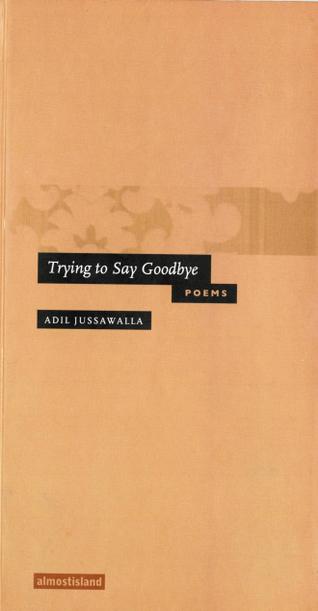 Signs of a new, forthcoming collection by Adil Jussawalla, one of India’s finest English-language poets, had been in the air for some time. A small but significant crop of “new poems” in the Monsoon 2009 issue of the online magazine Almost Island; an email from Arvind Krishna Mehrotra, mentioning his longtime friend and fellow poet having enough material for a whole new volume of verse. Finally this new volume, Jussawalla’s third collection in fifty years and his first in thirty-six, materialized as the debut title in the newly launched Almost Island Books.

Like other Indian poets of his generation, Jussawalla found his literary calling and motivation as a student in England, a bittersweet experience that lingers in the first part of Trying to Say Goodbye. Meaningfully titled “Vacant Possessions,” it features people and places from the poet’s London years as well as a few remarkable poems on materials, objects, and personal belongings seen as embodiments and conductors of the process of remembering, and the recovery and discovery that go with it. The section opens with arguably the most symbolic and haunting of these objects, a Graphos technical pen “that spoiled my plans in London” and is now “my cane, / my guide dog and the household god / that deals with things I’ve lost.”

The association of memory and blindness figures also in “Radio,” where an old and battered appliance—a survivor of sorts—addresses the poet in rather coquettish terms, reminding him of their close, almost intimate relationship. Intimacy, especially if experienced over time, breeds complicity and reciprocal understanding. Thus, within a few remarkable lines, a wristwatch changes its tone from confident to confidential, if not confessional.

Elsewhere, a YMCA swimming pool remembers, like an aging foster mother or prostitute, her long-gone colonial wards; a building under demolition puts up a falsely confident façade; another collapses; and yet another one raises new expectations in the form of a childhood construction kit. No matter how ordinary or derelict they are, they all have claims or complaints to make, lessons to teach, or wisdom to impart.

The second part of the book explores how memory and perception give shape, substance, and meaning to our everyday lives. A longtime household plant or a surrogate lamp may carve sudden areas of darkness or light, doubt or reflection, in a quiet existence defined by daily domestic rituals and matrimonial understatements. Then appearances and apparitions prove painfully real or realistic enough to suggest amputations, both figurative and real.

In this late and soberly retrospective collection, Adil Jussawalla confirms his talent as a stern and uncompromising stylist. His versification is tight, controlled, yet eloquently versatile and fluid. If Land’s End (1962) chronicled Jussawalla’s Wanderjahren in Europe, and Missing Person (1976) articulated a harsh and uncompromising attempt to deal with his repatriate experience, Trying to Say Goodbye reasserts Jussawalla’s stature as one of the great English-language poets of his generation—and ours.