I Dreamt a Horse Fell from the Sky by Adil Jussawalla 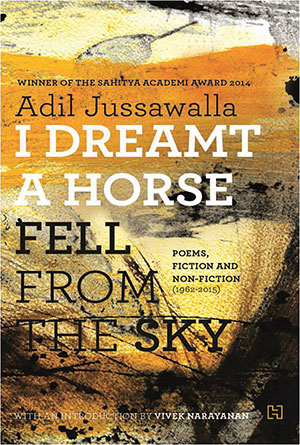 Having been part of the resurgence of Indian poetry in English that was very much Bombay-centered, Adil Jussawalla brought out a brilliant debut collection called Land’s End in 1962. His precursor was Nissim Ezekiel (generally acknowledged as the founding father of postindependence Indian poetry in English), who had published his first volume of poetry in 1952.

It took Jussawalla another fourteen years to publish his second and even more stunning book, Missing Person, in 1976. At this time, since there was no commercial payoff, Indian publishers were unwilling to take chances with poetry. The only outlets for poetry were magazines and newspapers like the Illustrated Weekly, Debonair, Quest, Opinion, the Times of India, and others. This led to an important parallel development initiated by Jussawalla, who established Clearing House, a co-op publishing venture that published Missing Person followed by books from other emerging voices.

Then, for some inexplicable reason, Jussawalla went silent. And a long spell it turned out to be, lasting thirty-five years between 1976 and 2011. There was compensation of sorts in that Jussawalla began to write columns, reviews, and critical essays for local papers, and even though journalism by definition is news that evaporates overnight, Jussawalla came to be regarded as the resident intellectual and was listened to with much respect.

By the time the 1980s rolled around, the revolution in poetry—and indeed, in Indian writing in English—was in full swing. Rushdie had made a sensational debut with Midnight’s Children followed a few years later by The Satanic Verses. What was set in motion primarily by Rushdie and employed creatively in the new poetry was a distinctive brand of the language itself—what Vivek Narayanan in his introduction to this book calls “a new tonality,” which is neither British nor American but a lingo of its own.

Ironically, in his thirty-five years of nonpublishing, Jussawalla wrote an enormous quantity of literary journalism, including a fair amount of poetry, which finally began to appear in print with Trying to Say Goodbye (2011); The Right Kind of Dog (2013); Maps for a Mortal Moon (2014), a volume of prose selected and edited by Jerry Pinto; and now I Dreamt a Horse Fell from the Sky (2015), a collection of poems, fiction, and nonfiction spanning his entire career. And there’s more to come. He is currently working on two manuscripts of poems and an immense amount of prose still to be sifted through.

Although never an “easy” poet to grasp, rereading his poetry is immensely gratifying. What comes as a surprise is a new side of Jussawalla with pieces like the title essay and “Birdhit,” which are charming and whimsical. And he appears to have read and reported on all the important writers of our time, including Angus Wilson, Naipaul, Eliot, Gordimer, Ondaatje, Bessie Head, and others.

For his admirers everywhere, the reemergence of Jussawalla is cause for celebration. The long wait is over.