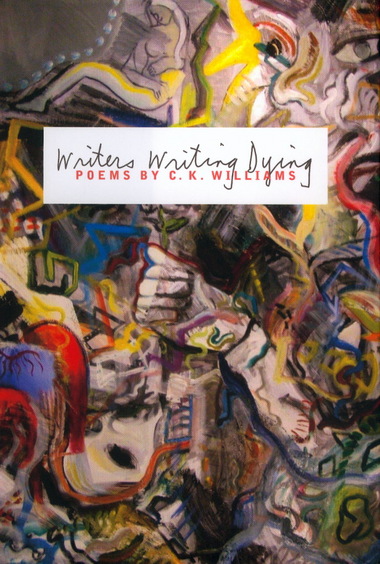 Despite his many accomplishments, including a Pulitzer and a National Book Award, C. K. Williams begins this book humbly, avowing in “Whacked” that “one never is, really, a poet. Or I’m not.” Happily, the remainder of Writers Writing Dying proves him wrong.

Ample evidence can be found in Williams’s use of his famously long line. Such lines are derived from Whitman, but whereas they are usually written to evoke breathlessly the ecstatic or prophetic tone, as in most of Allen Ginsberg’s poems, Williams has fashioned the long line into a surprisingly versatile poetic instrument. Often he uses it to suggest a line of thought worked out by a consciousness in time, as in “Mask”: “Didn’t Yeats have his file of fake Willies? His Anti-Self, his Cuchulain, his Michael Robartes? / Why couldn’t I then? Why was I stranded like the insole of a shoe in this face glued on so tightly?” At other times, he uses the length to suggest persistence, for instance the persistence of sexual desire in “Bianca Burning,” in which he says, “The sexual terror lions are roaring into my ears as I make my way between their cages / at the Bertram Mills Circus in England in nineteen fifty-seven when I’m twenty,” or the persistence of literary engagement in “Prose,” in which we read, “So maybe the novelists do save me, maybe Lawrence and Mann, Dickens and Melville and Greene, / even the landslides of Thomas Wolfe that go through me like castor oil release me from myself.” In both cases, the length of the line is more than a stylistic tic; it is thematically essential to most of Williams’s poems.

Matching length of line to length of life, Williams writes with humor and poignancy about aging, as in the moving and bold “Salt,” in which he admits to finding it “Abashingly eerie that just because I’m here on the long low-tide beach of age with briny time / licking insidious eddies over my toes there’d rise in me those mad weeks a lifetime ago.” Many poems in this book similarly evoke Shakespeare’s “sessions of sweet, silent thought,” juxtaposing vivid memories of the past with the quiet indignities of old age. Thus, the active “writing” of the title suggests the movement toward death, not death itself but rather the record of a poet’s progress through life. The writer writing toward dying is leaving a record of his life, a process Williams, like Shakespeare in his sonnets, imagines in metaphors of sexual reproduction: “if I could lie down like a mare giving birth, arm in my own uterine channel to tug out another, / one more, only one more, poor damp little poem, then I’ll be happy—I promise, I swear.” As this vivid and surprising image evidences, C. K. Williams’s many readers will be happy to receive these lively and interesting new poems, whatever the process that births them.