How to Fare Well and Stay Fair by Adnan Mahmutović 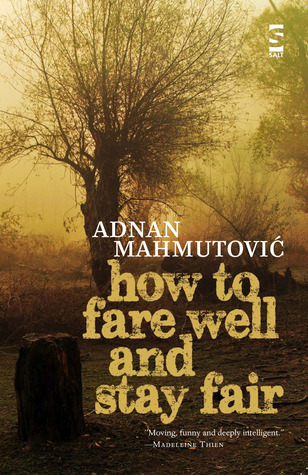 The opening story, “How to Fare Well and Stay Fair,” itemizes steps by which a displaced person grows roots. Its persona, whose biography closely resembles Mahmutović’s, advises, “Cry when you leave your country, if you absolutely must . . . but . . . do it out of sight of other crybabies. You do not want to encourage them.”

Eight stories feature Almasa, a fiercely defiant eighteen-year-old rape victim whose parents and seven brothers died in village violence. “Tricked into being the protagonist in fiction,” she never romanticizes her homeland while building a life in Sweden. But she embraces the essential joie de vivre of Aziza, an elderly Bosnian from Srebrenica who embroiders scarves, recites the Quran “mellifluously,” and seems a “jolly drunkard,” which, Almasa insists, is “not a nice thing to say about such a pious woman, but I love her too much to make her a stereotype.”

Sex proves vital as resource and relief. Fatima reappears in “Bayern Bayern,” bedding Jonah, a Nigerian Irishman. For her, past is not culture but body: “The mind forgets things easily, but my whole goddamn body remembers my lovers.” In her memory, Jonah and Aziz “grow together into something else.” Meanwhile, the young protagonist of “War Currency” trades sex for a failed chance to flee Bosnia.

Youth reveres age in tropes from Bosnian rural culture. In “Gusul,” Emina, who cares for the autistic Swedish boy, Stig, makes plum pie in the old way to please her dying mother, while in “Butter,” Adam churns fresh milk into putar for his beloved wheelchair-bound grandmother. That tenderness secures him a cherished position as caretaker for an elderly Swede (the job Mahmutović held while earning his PhD in English literature in Sweden), their close bond traced in “Vacation: A Travelogue.”

The penultimate story, “What We Talk about When We Talk about Suicide,” features a chat room whose personae discuss Stig’s successful suicide. When Almasa sadly reports that she urged him to seek counseling, her strong but caring voice hints that, once “embalmed for three years,” she is now firmly rooted in new soil. Finally, in “Afterword: Homecoming,” the Mahmutović-like persona of the opening piece relates his trip “home” to Bosnia with his wife and two small boys, where he rediscovers the “excessive Bosnian swearing,” finds himself “curseless,” “a language Puritan,” and realizes at last, “my home was, if anything, my strangeness.”

In sometimes earthy, sometimes lyrical English, his third language, Mahmutović here presents a compelling gallery of mostly rural Bosnians who face traumatic circumstances with grit, transcending their pasts to find footholds in the present, most often by embracing others.