Ben Packham’s arresting photo gallery is a window to Mongolia’s lavish natural splendor, the sprawl of its growing capital city, Ulaanbaatar, and the icy beauty of the Mongolian steppes. Below, Packham recalls the important role photography played in his time living and working in Mongolia. His photos accompany “Bards of Heart, Wind, Sky,” Sara Wilson’s interview with translator Simon Wickham-Smith in the September 2014 issue of WLT.

In July 2011 I left Australia to live in Mongolia for a year to work with the United Nations. Living in the capital, Ulaanbaatar (UB), I was fortunate that my work provided me with opportunities to travel around the country, and I soon discovered that there is more to this country than tales about Genghis Khan: the hustle and bustle of the rapidly developing UB; the vast, eerily quiet grassy plains; frozen lakes that are millions of years old; an ancient culture and unique traditions. I took my camera almost everywhere I went. It was almost impossible to take a bad photo.

Isolated by distance and lack of infrastructure, I quickly formed friendships with both expats and Mongolians. Sometimes the things we shared brought us together; other times, it was what we didn’t have in common that helped form bonds. Photography helped me connect with lots of people—either through a shared interest or helping others with hints and tips. Having a camera in a developing country can also bring you attention—people are drawn to cameras, allowing you to get closer to people and events than would ordinarily be possible. I became known as “the guy that takes photos.”

Taking photos was also a way for me to be in the moment, committing these experiences to memory. Photography can be a solitary pursuit, but I’ve never found it lonely. The isolation provides focus, giving you the time to appreciate your surroundings. Sometimes I would not even take photos; I’d just take my camera with me and sit, staring at the views and events taking place around me, letting it all sink in.

There is always more to a picture than the quality of the composition or having the right light. I’ll look back at an overexposed shot of a sunrise and not worry about the flaws of the picture, but cherish the memories of nights spent talking and drinking with people until the sun came up. I may not see any of those people again, but the photos will always be there to remind me.

Editorial note: For more, listen to a recording of Mongolian poet G. Mend-Ooyo’s “The Swallows.” Enjoy the original while following along in Simon Wickham-Smith’s English translation. 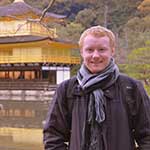 Ben Packham lives in Sydney, Australia, working as an accountant. In his spare time, he indulges his hobbies of photography, woodworking, and riding his motorbike. He spent a year living and working in Ulaanbaatar, Mongolia, with the United Nations between 2011 and 2012.