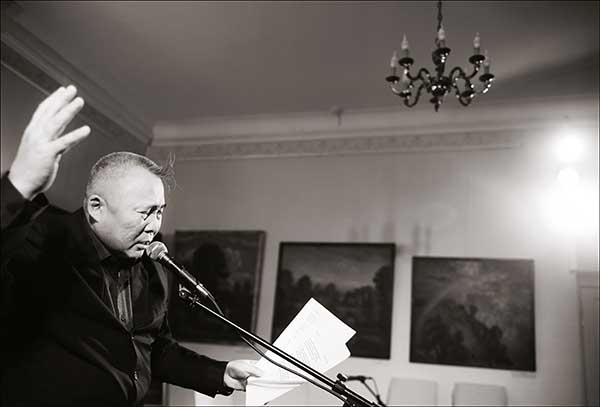 Listen to videotaped recordings of both Russian originals in the following clip (4:00-10:05).

Out of the embittering mountains, out of faraway valleys, out of China,
Legends from “under the counter,” the hiding places, Open Sesames,
As though out of the blue the gold hoard of Kolchak’s army
Surfaced, transmitters of forgotten words, bearers of legends and fables.

Untouched by collectivization, like the Lykov family preserve,
They live and toil like an illustration out of a Buryat folktale,
Homespun-plain peasant robes, silken broad cloth-belts,
Conical points of sharp-hats topped with blood-red tassels,

Their horse-tying poles are as high as the mountains,
The hooves of their horses broader than shovel spades,
Blinding smiles out of the malachite casket of the genome,
Speak as the common people do but seem to be singing.

Before the revolution, before fratricidal war, beloved,
Remembering their ancestry to the seventh dislocated generation.
Most devout, like the Old Believers, nomads,
Exiled by the Soviet grandfather frost of the twenties. . . .

Having preserved the old Mongol vertical style script
They carry the steppe’s millennia in their souls
And so sing and love their birthplace by Lake Baikal
And in such a way that we have, probably, long ago forgotten.

Translator’s note: Alexander Vasilyevich Kolchak was a polar explorer and commander in the Imperial Navy who, during the Russian civil war, established a reactionary government in Siberia and was commander-in-chief of the White forces. The Lykovs were a family of Russian Old Believers who successfully hid for forty-two years (1936–78) in complete isolation from human society in the Abakan Range.

The longest village street on the planet, 17km long,
is in the village of Bichura, Buryat Republic.
– Guinness Book of World Records

Whose are they, the longest village streets in the world,
Washed clean – down to the carved window staves – whose log houses?
Women’s blouses more colorful than the tsar’s own tents, horned headdresses
All done up in amber, still around from the old trade routes, from the Baltic shores.

Their menfolk neither drink nor smoke, but instead sow and till methodically,
Their fists tight around horse-drawn Polish ploughs, and Buryat horsewhips,
Digging up furrows – across the taiga, the hills – Mikula-frontiersmen out of a
fairy tale,
Wear beards – in hut hovels and hamlets – priests-Avvakums of the exiled.

With a saintly expression they arrived here clutching in hand the springs of their faith,
As though falling to their knees to imbibe from them, crossing themselves with
two fingers,
Settling on the edge of the Buryat wilderness at the foothills of the
Beyond-the-Baykal peaks,
As though Ancient Rus’ grown tired of the world gathers up here the
sacred-mountain strength.

From the Buryat learned to eat local dumplings, in return taught them to
make borscht’,
They even speak Buryat – tala, that is friend – all the time singing the old-timey songs,
On occasion intermarried with Buryat women, took local young men for grooms,
That may be why my round-faced grandma’s eyes are a color not from these parts. . . .

What character these provinces that served as place of exile to both the Tsars
and Khans,
Whether it be rotten for the Siberian frosts, or beautiful for its freedom and liberty?
One thing only remains to be done, like a Siberian cedar standing through
rapacious frosts,
To persevere and to pray – Om, Mani! Oh, Thy name, may it be a shining light!

Translations from the Russian
By Alex Cigale 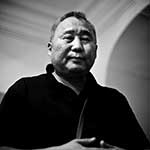 Amarsana Ulzytuev (b. 1963), an alumnus of the Gorky Literature Institute, is from the Buryatia capital of Ulan-Ude, one hundred miles southeast of Lake Baikal. Just off the presses is his third book, Anaphora. His first two are Morning Forever (2002) and Abovenew (2009, with an afterword by Alexander Eremenko), and a fourth is forthcoming from Vremya. Two of Alex Cigale’s translations of his other poems appeared in the May 2014 issue of WLT.