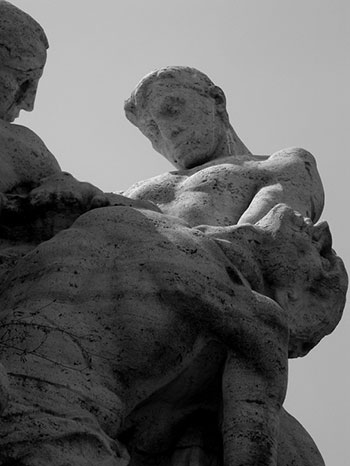 Farid Tali’s Prosopopoeia is a work of postmodern elegy comprising narrative chapters that alternate with dense, lyrical prose poems. In the nonlinear narrative sections, the protagonist describes for us the death of his brother by AIDS and his family’s grief. Meanwhile, the prose poems depict the bizarre, postmortem life of the brother’s corpse through detailed, baroque descriptions of its putrefaction. In other words, the elegy is not so much for the personality and life of the deceased sibling as for his physicality: his body when alive and his corpse when dead.

“We needed to conduct our sorrows toward the central point of our lives: the house of the mother:” the world needed to get back on track, meaning we had to stop crying, stop belaboring the pain. No point collectively moaning like children. It would seem pathetic, after all. I held on. Prepared my body to wake. A flat automatism: stimulate the joints, rub the eyes vigorously, pass around sweets, the good stuff . . . That’s what needed to be done. With the spirit of a man of resolution I began a day of obligation. We took the car, it was nice and smooth. We could feel under the wheels its flawless speed. We reached my mother’s house without a hitch, silent and calm.

The green trees seemed greener, the sky bluer, how repugnant of them. I said so to myself but without thinking it deep down. It was imperative that I find certain things to say. I was seized by near weeping at the sight of familiar objects. They spoke, those bright walls, the cutlery lying all about the kitchen, and that multitude of people. My family. Everyone at the frontier of silence. Not a single gaze unacquainted with death.

All who came put themselves to work. One swept the kitchen floor. Another tidied the tableware. Someone else made the beds. This was good. The hands and arms and legs did not care whether or not they were spoken to since they were all in the midst of tasks they needed to accomplish.

I checked the windows and their panes and they were extraordinarily clean. They breathed. Despite all the bustle, we didn’t touch one another, at least not in any continuous fashion. Terribly violent comets, inadvertently colliding, we were embarrassed afterward for having caused a din for which we submitted no excuse. It was obvious we were sorry. Those trajectories could’ve been traced. I played astronomer and certain well-synchronized satellites could not, indeed, be found. It’s possible there were some gazes that met one another, I was not privy to them.

My father came into the room where I was. The curtains were drawn. He placed his hands on my head. This was the only contact. Gentle, hardly a collision. My cheeks tensed up, hideous, parched for tears. But my father believed in that legend according to which the tears we shed, if they flow down one’s cheeks, make the soul of the deceased suffer. I didn’t cry, I was beyond crying. I thought of what people say about paradise, that it’s bursting with good things, it’s eternal bliss; and I realized I didn’t want to die, it didn’t interest me to know such things.

My brothers were dazed. They were seen wedged in their muteness.

In the room there were men—old, Arab, sitting in a circle, singing, chanting so as to better speak. The verses from the Qur’an were recited in a child’s rhythms. I found this lovely. It replaced the pain. Like retreating waves, those gusts of pain seemed to exile themselves without promise of return, they made a space for something new, a vacuum that was not yet a nuisance to us: we felt we could be this void just as we could whatever came next. A thing textured like something durable, a happy abscess patiently deflating. Something other than these painful woodpeckers jumping about in all directions. It would settle in as if it were simply taking its place. Would make itself almost not feel. Perhaps one ought to give it a name: sadness spreading out like fog that, when gone, always leaves some traces in the dew, on the flowers, or in the temperature gracing the atmosphere. Pain dwindling, the calm after a storm, which causes suffering only by remembrance of that which it has come to replace. Something nameless which nevertheless exists. I understood that from that point on this thing would be on all faces and objects I’d meet, I’d have to make do with it.

It would take root everywhere, even there where death had not occurred. And I would breathe it, this thing, I would keep it on me and with me, because I was told many times, later on, and today also, that I’m bursting with it. And there is no word for it.

The knot tightens; the torso wastes and agitates. Hands with bound fingers beat the drum. Keep busy like the hands of a baker at the very end of night. Death kneads the skin, then the muscles, and finally, the bones are chewed up from all the stress. Everyone saw desire dawn on the chest as well as on the stomach, both marvelously sculpted. The force of love, the morning of love breaking there. The skin recalls: caresses, long explorations by various hands, and, finally, lips. Everything fucked willingly. Every movement of the shoulders worsened the death rattle traveling in fine waves. One regrets the supple brutality: watching the chest lean forward, lift, descend again as if to pick something up, watching (and smelling) the sweat abound, then wanting it.

The movement changes. It falls. Only sadness ascends, sadness breathed out in a sigh, collected by those who are alive. Desire, which had died, lives again in order to tell us this. Let us listen.

Now the shoulders roll timidly, watch with apprehension the world that surrounds them, the world turning foreign. Now and again they speed into obscenity, more often they hide within the modesty of dying, waiting for their lot to be decided. They are like colossal towers awaiting dynamite. Their one objective is to collapse. No person, no thing lives in them now. Or perhaps only idiots and suicides.

The stomach opens up in its center. A minor tear that cannot be seen but which can be identified by the sound it makes and which comes to disturb one’s contemplation of the body, as would an insect flying in the midst of a derelict church. A curtain drawn aside, revealing a hideous pit haunted by black: everything is imperceptible here in this stomach giving itself, discovering the center of its nakedness: obscure entrails that the viscera flee.

The skin, parted in two, comes to arrange itself on the flanks, offering a vision of the tomb that soon the whole body will inhabit. Already one is aware of the cadaver’s slow descent into the earth. Noiselessly and calm, the decomposed animal shall bear its limbs to its earthly bed as if an offering to a venerable god. And, weakened by the act of dying, it will need these immense, living arms that know how and where to deposit the dead.

Informed, perhaps, of this near future, the dark color of the pit trembles and trembles again. Isolated in the stomach, the black sadness floats upon a morbid fluid hastily brewed from the melting of the liver, colon, and pancreas. Moreover, in this unbearable stink discharged from the stomach can be read the absurd. Palpable as sound, a perfume of putrefaction spills out into the room. As if one were listening to the swan in the pond dying, which sings as it is dying.

Translation from the French
By Aditi Machado 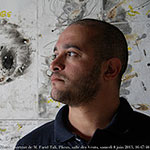 Farid Tali (b. 1977) is a French writer of Moroccan origin. In 1999 he published his first book, a collaborative journal with Renaud Camus titled Incomparable. His debut solo novella, Prosopopée, appeared in 2001 and is forthcoming in English translation from Action Books in 2016.

Aditi Machado is a writer and translator from Bangalore, India. She is a PhD candidate at the University of Denver.