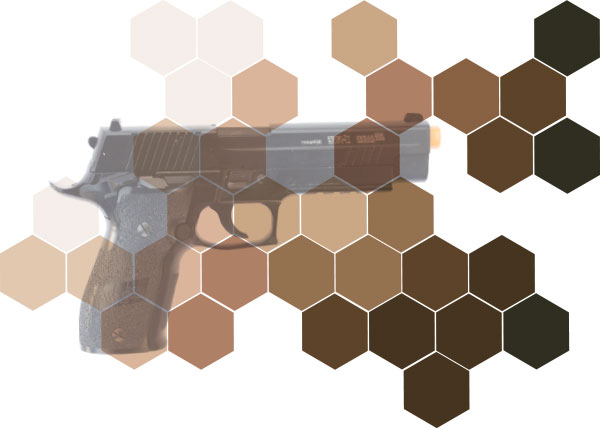 table the dining hall has left. It’s late,
and vegetarian pizza is the best thing
the joint has going but we stay, mostly

to partake in what we would never call
gossip in front of our uncles but most
certainly is: who left with how many

numbers, top ten worst life choices
made that weekend, how Lauryn’s cobalt
dress lassoed every human breath in the room.

Night unspools. Our attention plants
its feet in late Clinton-era Everywhere
and we sing of what we yearned for back then,

back home, what mocked our small,
stupefied hands like a white stove
or the promise of beauty.

Consensus lands on Super Soakers.
B.B. guns. All manner of false weaponry
we were barred from as boys

because of a mother’s fear, her suspicion
that the rules of a given game might shift
and gunfire would be our only warning,

the policeman’s voice an aftershock, his first mouth
having already made its claim. Even now, no one
among us calls this a kind of theft, which is to say,

the term never launches like a hex from our tongues,
but even if it did, somehow, rise and alight the air, if everything
we missed during the years we grew tired trying not to die

found its own body right then, right there in the dead
center of campus, what difference could it make now
that we have already mastered the rule book, the protocol

we learned before we learned to slow
dance, or smooth talk, or scream
the lyrics of a favorite song in a group

In Defense of Passing

Most of us call it cloaking,
though the academic
term for the practice slides

just as smoothly off
a teenager’s tongue:
holographic deracination.

Within days of wide-scale release,
the Times will hail this device, its
attendant social phenomena,

as triumphs of modern technology,
inevitable advance given
the speed of post-racial desire,

by most other means.
The machine’s inventor
will make no such claims.

A plainspoken woman, she was.
Stanford grad, white as a lab
coat. Cited her time overseas

as primary inspiration;
all the suffering she’d seen
caste cause. The device came

to her in a lucid dream, this silver ellipse
small enough to wear on the wrist
or lapel, just one touch

and any future you choose could be
yours. Soft, false flesh, draped
like a new lover over your body

and just as clumsily until you work out
the rhythm of it, the slang,
how to maneuver this

cold glass suit, light as it is.
Believe it or not, protest
didn’t last long.

Sky-high pricing kept the cloaks
an upper-class concern for months, years
before poor folks got a hold

of any prototype worth the worry.
Once they did, you would think
they had stolen something worth more

than a date with the quarterback,
or a job interview. You would think
they had killed someone important,

or blown up the moon, the way cops
flooded the slums, clubs in hand,
beating the color off of them. 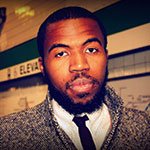 Joshua Bennett is a doctoral candidate in the English Department at Princeton University and has received fellowships from the Callaloo Creative Writing Workshop and the Ford Foundation. Winner of the 2015 Erskine J. Poetry Prize, his poems have been published or are forthcoming in Beloit Poetry Journal, Blackbird, Callaloo, New England Review, and elsewhere. Bennett is also the founding editor of Kinfolks: a journal of black expression.