The Shape of Arab Music to Come 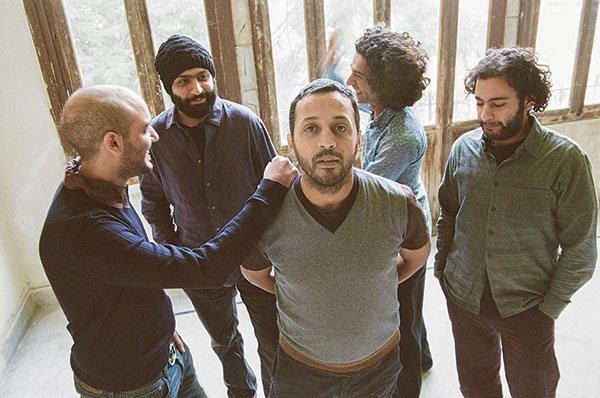 If ever an album has been created to invite the uninitiated to dip a toe into the deep water of contemporary Arab music, it is Alif’s debut release, Aynama-Rtama, released September 4 by Nawa Recordings. Alif is a supergroup, composed of five musicians who are well-regarded recording artists in their own right: Khyam Allami (oud), Tamer Abu Ghazaleh (vocals/buzuq), Bashar Farran (bass), Maurice Louca (keys/electronics), and Khaled Yassine (drums/percussion).

Aynama-Rtama (Wherever it falls) is a musically dense but engaging album that provides layer upon layer for both the traditionalist and the futurist to dissect, inspect, and admire. Abu Ghazaleh turns in one of his finest and most coherent recorded performances to date, welding his considerable gifts as a vocalist to exquisite borrowed texts from poets like Mahmoud Darwish and Sargon Boulus as well as contributing lyrics of his own. Allami and Louca weave an intricate tapestry of melody, along with Abu Ghazaleh’s buzuq, which, in the absence of traditional Western chords, serves as the counterpoint to the melismatic vocal lines and dictates the dynamic viscosity of the music from moment to moment.

Alif offers little to listeners eager to pigeonhole the individual songs into one genre or another. The first single, “Holako,” opens with a traditional pairing of the voice with oud and percussion, only to erupt into an insistent odd-meter groove that careens beneath a catchy but dissonant melody unsettling the entire arrangement before subsiding abruptly beneath Abu Ghazaleh’s voice.

Other highlights include the moody “Al-Juththa,” “Al-Khutba Al-Akhira”—one of the more frenzied canvases upon which Abu Ghazaleh is unleashed to work his frenetic vocal magic—and the album closer, “Eish Jabkum Hon?” which improbably references a 1950s swing beat for its playful melodic explorations.

Aynama-Rtama feels like an album that strikes new ground without warning but, in fact, represents a culmination for its five members, who have been pushing the envelope of the possible for years. It was certainly worth the wait and will, no doubt, reward attentive listeners for years to come.

Editorial note: The oud is a fretless, stringed instrument that is played all over the Arab world and beyond. The buzuq is a long-necked, fretted lute.