Monica Brown served on the jury that chose the 2021 NSK Prize winner and successfully championed Cynthia Leitich Smith as her nominee. On the final day of the 2021 Neustadt Lit Fest, she delivered the following tribute.

If you feel, as I do, that literature has an impact on our world, that art has work to do in our hurting world, then you know I wanted to celebrate a writer who had not only written wonderful books but one who had also impacted the entire field of children’s literature, a literary and literacy activist, if you will. A champion of empathy, kindness, and justice.

Cynthia is a brilliant writer, as anyone who has read her work, especially her most recent, most transcendent novel, Sisters of the Neversea, can attest. Yet she, in that way of great and generous humans, has made it her life’s work to empower others. The late, great Toni Morrison once said, “When you get these jobs that you have been so brilliantly trained for, just remember that your real job is that if you are free, you need to free somebody else. If you have some power, then your job is to empower somebody else.” Cynthia empowers the diverse children who read her many books, and she empowers new and emerging voices in our vast—yet not so diverse—field of children’s literature and publishing.

Mixed-race children were and are still being described as fractions—half this, a quarter that, a concept I reject, as I believe all children contain multitudes.

I was once such a voice. The mestiza daughter of a North American father and a Peruvian immigrant, I was an avid reader as a child, yet there were no books that represented my lived experiences, nor my family’s. I became a journalist, a mother, an educator, a scholar, and again reflected on the fact that there were few books reflecting beautiful, bilingual, bicultural families like my own. In fact, mixed-race children were and are still being described as fractions—half this, a quarter that, a concept I reject, as I believe all children contain multitudes, that they are whole in the multiplicity of their identities, and need not fit—or be forced into—boxes. Once again, I found wisdom in the words of Toni Morrison. She said, “If there’s a book that you want to read, but it hasn't been written yet, then you must write it.” So that’s what I did. I wrote Marisol McDonald Doesn’t Match / Marisol McDonald no combina, now celebrating its tenth anniversary this year. I’ve authored many books for young readers, but I mention this early book because Marisol had such difficulty finding a publisher. The book was eventually published by Children’s Book Press, now an imprint of Lee and Low.

I wondered, how could I support this little, oft-rejected book? And how might I help it find an audience and launch it out into the world? I turned to community. Luckily, the Black, Indigenous, Latinx, and Asian American networks of writers are generous. Mostly, we root for one another with open hearts. Someone suggested that I approach Cynthia Leitich Smith, who, already a visionary, was supporting diverse writers and collecting resources for her website and blog Cynsations: Reflections and Conversations about the World of Books for Young Readers. She invited me to write a guest post and mentored me through the process. On the way, I learned more about marketing, promotion, and writing about my work.

And I am only one of many who feel this way about Cynthia’s mentoring and generosity. I’d like to share Don Tate’s words. He the author/illustrator of William Still and His Freedom Stories: Father of the Underground Railroad, among many other books, and he shared this with me: “Cynthia Leitich Smith is the rock of the youth literature community. Beyond talented author, Smith is a reliable friend, mentor, and teacher to everyone who crosses her path. Smith makes the world of publishing a better place for us all.”

Another example: the SCBWI Texas—Austin chapter named its mentor award the Cynthia Leitich Smith Mentor Award in recognition of the immense service she’s given to writers—in and out of the state. Now, in her newest endeavor as the author-curator of Heartdrum, Cynthia is perhaps making an even greater impact as she centers diverse Indigenous voices at HarperCollins. Traci Sorell, the Cherokee author of We Are Grateful, wrote to me, “Without Cynthia Leitich Smith, the landscape of Native creatives in the field of children’s literature would not be as lush. Her work leads by example. She also extends herself by mentoring Native writers about craft, business questions, and even connecting them to agents. Every reader, every creator, every publisher, everyone period benefits from Cynthia Leitich Smith being in the industry over twenty years.”

I’d like to turn now to Cynthia’s storytelling—her words and creative vision. As a writer, Cynthia offers us a prolific and diverse body of work across multiple genres—picture books, middle grade, and young adult (both realistic fiction and fantasy). In this short essay, I will only touch upon a few. 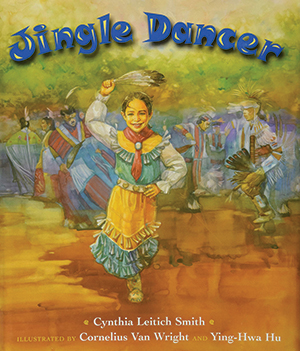 As a picture-book author, I was first drawn to Cynthia’s debut book, Jingle Dancer (2000), illustrated by Ying-Hwa Hu and Cornelius Van Wright. I adore the form of picture books, as they are the place where art meets text, a place that is filled with beauty, lyricism, and light—language distilled, like poetry flowing from page to page. Jingle Dancer exemplifies the best of the form. It is the story of Jenna, a young Muscogee and Ojibwe girl longing to dance in her first powwow:

The story depicts Jenna’s search for jingles to make her dress sing as she dances in her first powwow—and her community does not let her down! Jenna is able to dance for her community, for her grandma Wolfe, “who warmed like Sun.”

Jingle Dancer was the incredible beginning of a children’s writing career that includes the newly rereleased nonlinear middle-grade novel Rain Is Not My Indian Name (2001), a stunning and sensitive work about love, grief, and heritage. It also includes Indian Shoes (2002), a middle-grade collection of interrelated stories, where Cynthia introduces us to Ray, a Seminole-Cherokee boy living with his grandfather in Chicago—an important representation of the Indigenous urban experience and cross-generational relationships. Indian Shoes is an homage to Cynthia’s grandfather and all cherished elders.

It was difficult to choose only one book, but as her nominator, I asked jury members to read Cynthia’s novel Hearts Unbroken (2018), because when I read it, I was struck by the beautiful and realistic depiction of contemporary Native American teenagers—their everyday struggles, passions, pain, and complex heritage—who were so often invisible in the world of children’s literature. I love these lines on the very last page of the novel, which includes an everyday but profound statement in the Mvskoke language:

I love who I am. I love my family, my friends, my Native Nation. I love Kansas. And chances are pretty kick-ass that I love Joey, too.

Pu fvckvkes. We are happy.

My arm circled his waist. His arm circled my shoulders. He asked, “Do Native people believe in Thanksgiving?”

I kissed him. “We believe in gratitude.”

Hearts Unbroken won the 2020 ALA American Indian Youth Literature Award, and in her  review of the novel, Dr. Debbie Reese, Nambé Pueblo, wrote that it “captured life for so many Native teens who most of America doesn’t see, even though they are right there, in front of you. . . . There’s so much love and warmth and reality all through Hearts Unbroken. And so much hope!” Cynthia’s work has had a major impact on children and young adults, both Native and non-Native alike.

Cynthia’s work has had a major impact on children and young adults, both Native and non-Native alike.

I now offer a brief glimpse of Cynthia’s newest novel, the astounding Sisters of the Neversea (2021). When I nominated Cynthia, this book was not yet out. When I started reading, I was as enchanted as the “cluster of curious, twinkling stars” who “gathered to observe the festivities.” Sisters of the Neversea blew me away or, rather, lifted me up in the night sky and let me fly as Lily and Wendy do, up and into the magic. My pixie dust came not from Belle but from this incredible, delightful, revelatory book. Sisters of the Neversea is a revisiting and yet wholly original retelling of J. M. Barrie’s Peter Pan. Cynthia’s version focuses on Indigenous perspectives, and girls’ perspectives, and new approaches to this story of magic and fantasy and Neverland. Without giving away too many details about the book, let me just say that Cynthia’s Peter Pan is at times monstrous, dangerous, and disturbed. But he is a child, and as Cynthia has said, we don’t give up on children. She certainly never has.

After I finished this remarkable novel, I took a walk in the forest near my house. I live in Flagstaff, Arizona, surrounded by many forest trails. I decided to take one my husband and I have named the fairy trail, as local children have created fairy homes, painted rocks, hung tinsel and so forth along it, causing great consternation to some hikers and environmental purists, and delight to others.

I was mesmerized by the confluence of this fairy trail and the pixie dust of Cynthia’s novel.

I was mesmerized by the confluence of this fairy trail and the pixie dust of Cynthia’s novel. I stopped on the path and texted her. I would like to share the transcript of our conversation, as it illustrates how profound a writer Cynthia is, even via text. But even more importantly, how generous she is in lifting all of us up, including me.

Monica: Cynthia, I want you to know that I’m walking in the forest reflecting on your magical book. It’s one of my favorites in recent memory and so full of love and import.

Cynthia: Profoundly honored, my friend. I believe my subconscious has been working on it since I was about a little girl, aching for magic that invited me in.

Monica: Yes—it’s so complex and wonderful and compassionate too!! It speaks to both the girl and the literature professor in me!

Cynthia: It took so long to be welcomed to write this kind of book of the heart. It’s a delight to make such a deeply felt and unapologetically Indigenous contribution to the conversation. Really, I didn’t know if we’d ever reach this point.

Monica: That’s a little how I once felt about mixed-race characters that were whole and beautiful and not described in fractions. Marisol McDonald, my most rejected manuscript, is in its eighteenth printing!

Cynthia: I dearly love that book! One of my all-time favorites!

Cynthia Leitich Smith lifts us all up and has made an indelible impact on the field of children’s literature, both with her award-winning writing and through her advocacy and truly tireless mentorship. I am thrilled she has been honored as the first Native American recipient of the NSK Neustadt Prize. Thanks in part to Cynthia’s inspiring work and her advocacy, I am sure she will not be the last. 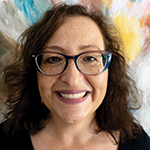