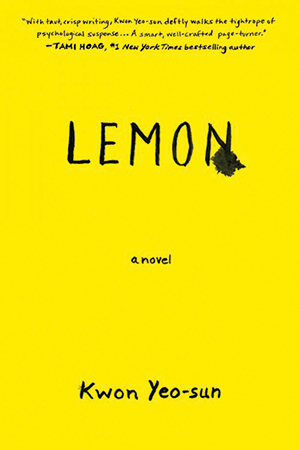 LEMON BEGINS LIKE many crime dramas: someone’s been murdered and the police are interrogating a suspect. Well, the victim’s younger sister is imagining that interrogation—“By imagine, I don’t mean invent”—and already on page 1 we know this isn’t a typical police procedural.

An exceptionally beautiful eighteen-year-old girl has been murdered in 2002, the year Korea hosted the FIFA World Cup. (I mention her beauty because it’s a preoccupation of our narrators.) “On July 1 in the afternoon, Hae-on’s body was discovered in a flowerbed in a park not far from the school. She’d been found with blunt force trauma to the head. The school was turned upside down, engulfed in shock that couldn’t compare to the hype of the World Cup.” Each of the eight chapters is from one of three perspectives of varying reliability—at least if the reader is seeking facts. Three women drop clues while revealing more about how the crime has affected others, particularly the victim’s younger sister, their mother, and the two men who were once, when in school, suspects. With no eyewitness, a solid alibi, and a lack of evidence to solve the High School Beauty Murder, the case goes cold. With no trial, no court ever issues a judgment. And without that judicial declaration of truth, those close to the victim are left to investigate the case on their own and deal with their grief in disturbing, imaginative ways. Eventually, we wonder which crime we’re solving. Without giving anything away, this makes the novel intricately chilling and hard to put down.

A spare novel of 147 pages, I was first drawn to it by its bright yellow cover designed by Kathleen Digrado. Though Kwon Yeo-sun received the Sangsang Literary Award in 1996 for her debut novel, Niche of Green, this is her first novel available in English, thanks to the elegant work of translator Janet Hong. The Korean original appeared in 2019. The book held my interest thanks to both the plotting and the authoritative, original means of expression. Here’s an example: “My mother hit my sister. Not frequently, and not as a consequence of wrongdoing, but in a sudden outburst, like a sneeze.”

The novel does, as billed, evoke Parasite: economic inequality plays a recurring role. It is also, as we expect, a story set in motion by a crime. Ultimately, though, it is less a whodunnit than a What Did She (younger sister Dae-on) Do and How Did She (the author) Do it.