Series editor’s note: The poem this week, “The Mothers,” by Arao Ameny, is less of a poem and more of an offering, a wanting; here is a space where the speaker has aptly placed two separate groups of mothers—those who have lost sons and daughters due to police brutality, and those whose children are the same police officers that are perpetrating violence against Black lives. Here, worlds collide; the poem seems to ask, what kind of mourning must one do to process this kind of grief; it asks, do these mothers also meet and talk / about the loss our black mothers bear? It never quite presumes to know the answer, and yet, in its sharp inquisitiveness, it arrests us in our grief, and forces us to consider a different perspective. And like a memory that refuses to age, we are embroiled in its thinking too—still, still, as there is still so much mourning to be done. – Mahtem Shiferraw

I read a news story about the mothers of
black sons and black daughters killed by police violence,
how they gather and meet,
a network of 400 mothers,
now son-less, now daughter-less,
how they call each other,
save each other’s names
alongside the names of their children,
how they talk and cry and sing and laugh
and exchange photos and stories
to remember, to resurrect –

I wonder if the mothers of the police who killed them also meet
once a month, call, or cry or talk
about what their sons or daughters could have done differently –

do these mothers also meet and talk
about the loss our black mothers bear?

do they know
that they rest their hands on their wombs
for days, sometimes for months,

do these mothers also plan weekends and holidays
talking about what their own sons have done?

I wonder if they also get together on Sunday afternoons
to drink lemonade, or sweet tea, to talk and cry and think
and remember what life was like before any bullets left the gun.

Do they know that some mothers dream
of their children’s faces, and these faces stuck in memory never age?

do these mothers of police officers also gather and meet?
do they also have a network of mothers
whose sons and daughters have taken the lives of other people’s children?

Again, I wake up to news stories about the mothers of black
sons and daughters killed by police violence
how they gather and meet,
another day or night interrupted,
sweet air mixed with tears,
how they cup each other’s chins and faces,
and pull in another woman as her shoulders shake,
to mourn her child. 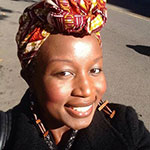 Arao Ameny is a Ugandan-born, US-based poet and writer who earned her MFA in fiction at the University of Baltimore. She has an MA in journalism from Indiana University and a BA in political science from the University of Indianapolis. Her first published poem, “Home Is a Woman,” appeared in the Southern Review in 2020 and won the James Olney Award. She was a winner of the 2020 Brooklyn Poets Fellowship, a finalist for the 2021 Brunel International African Poetry Prize, and a nominee for the 2021 Best New Poets Anthology. Currently, she has a one-year contract role as a biography writer and editor at the Poetry Foundation.