Series editor’s note: In Aracelis Girmay’s new poem, the speaker traces their lineage to an unnamed foremother, one made with the very same elements of the earth. And this foremother is not just a knowing, it is a girl, a shriek, a gold, who does a carrying beyond herself, an ancestor mother who feeds, who catches knives, who leads, who is both flower and war, who becomes a thing othered for the sake of her kind. In this gentle tracing of matrilineage, the poet not only bears witness to the worlds that continue to bind our foremothers, but she also writes them into being; by recognizing one ancestor, and carrying her with this poem, the poet sets her free, and us, on the page, from a world that was, a world that wasn’t; and this claiming of us is so strange, so sweet, as our knowing has grown coarse with things that continue to bind us, over and over again. But here, in this poem, we too become her tamarind, her yam astride, writing ourselves into her roots, to reach a clearing from these storms that continue to churn us inside out. – Mahtem Shiferraw

and though she was the river silt, and gold

and though she was the drop of rain

and just a skinny bitty
dandelion of a girl,

anytime they needed someone
to carry the pots, to catch the knife,
to walk in front,
it was her they put

and though she was the shriek inside her mother’s bed

and was their dog and was not free

and was the man and for the man

so front so back through the door inside the drum, la vida te da

and what rode her head she could not lose

and what opened her free she pressed inside

my tamarind my motherling my yam astride
the dark

she wrote her root into the dirt

the green she was she was
awhile 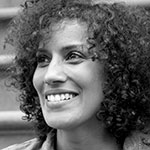 Aracelis Girmay is the author of three books of poems, most recently the black maria (BOA Editions, 2016), for which she was a finalist for the 2018 Neustadt Prize. Girmay is on the editorial board of the African Poetry Book Fund and is the editor of How to Carry Water: Selected Poems of Lucille Clifton (2020).